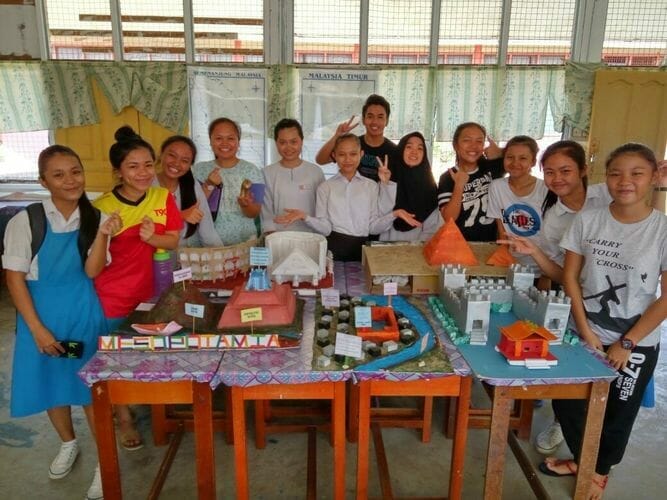 Teaching is said to be one of the hardest, yet most rewarding jobs out there. IRL takes a look at four different teachers who went the extra mile, just to make sure their students get the best out of life.

These teachers have worked with 100% Project, which is a social enterprise that helps crowd fund projects for teachers who want to make a difference. These are their stories.

The Coach Carter of Sekinchan

Nigel Sim Boon Wei had a Masters degree in Engineering. While most of us would have immediately started building our own Ironman suit, Nigel went down a different path – he wanted to raise a community of Tony Starks instead.

So, he enrolled in the Teach for Malaysia program, and started an after-school robotics workshop for a high school in Sekinchan. He taught them all about robots and engineering, and together, they designed a robot vacuum cleaner and an automatic recycling machine called EcoBot.

Like Tony Stark, Nigel had a charitable heart – he bought the parts to build these bots with his own money. Unlike Tony Stark however, he didn’t have billions of dollars sitting in his bank account.

Naturally, he didn’t have enough money to bring his students to the Young Innovaters competition in Kuala Lumpur. If you’re wondering what that is, it’s like the final tournament in Karate Kid, only, for inventors.

That’s when the 100% Project stepped in. They managed to fundraise RM3005 in just two weeks. That was enough to send Nigel and his team of 14-year-old robot engineers to KL to compete.

Their design of the EcoBot won third place. They may not be champion, but we here at IRL think it’s a victory nonetheless.

We know what you’re thinking – no, it’s not a story about a someone‘s badonkadonk. Pulau Bum Bum is a legit island off the east coast of Sabah.

On the island is a little primary school with another teacher who, you know, actually gave a shit. Nik Azri bin Nik Mohamed Arriff was posted there from Kota Bharu, and was about to start his first gig as a teacher.

On the first day of school, he was assigned to an adequately furnished classroom to nourish the young minds under his care.

And by ‘adequately furnished’ we mean filled with absolutely fuck all.

We’re not exaggerating – the place was completely empty. There weren’t any tables, chairs, or a single teaching aid in sight.

“My heart broke when I saw my students who were eager to learn but their learning marred by the limitations of their “classroom”. I resolved to change that, for the sake of these students who yearn for a better education,” Nik said.

So, the first thing he did was buy brushes and paint. With his own money.

He called up two friends, paid them in pizza (presumably), and began painting the walls. He even added motivational murals to encourage the students.

Nice guy that he is, Nik Azri even camped out at the school for eight days just to finish painting, because that’s just what happens when you’re a genuinely good person.

If you thought that was the end of his extra mile, think again.

His students were initially branded as the ‘remedial class’. This meant that these students have been classified as slow learners who couldn’t read, write, and calculate.

While other teachers would’ve just muttered ‘FML’, Nik Azri smiled and said “Hey, how about we try to get these children to love learning instead?”

He approached the headmaster, and together, they rebranded this class to “Academy IQ”.

“We want our students to think of Akademi IQ as a space for them to learn and discover themselves,” he said.

There was still the issue of furniture. Obviously, there was no way he was going to teach his students a-la biblical times. So together with 100% Project, he raised RM8,347 to equip his Akademi IQ classroom with tables, chairs, book racks, whiteboards and anything else you’d expect to find in a modern classroom.

“They may be marginalised, rarely cared for by the community and are often critically illiterate. However, if we have the resources to take Akademi IQ to the highest levels, I believe this perception and reality will change.” said Nik Azri.

When Calvin Tan Han Jin walked into the school’s Science Labs to teach the Form 1 and Form 2 students, he couldn’t get them to sit down.

It wasn’t excitement – the students literally had nothing to sit on.

The stools in the science labs were made from plastic, and after years of use have become flimsy and broken pieces of turd.

At some point, seating in the labs became less of a teaching aid, and more like a resource on The Hunger Games.

In fact, some of the shorter students had to resort to McGuyver-ing their stools by stacking them on top of each other, causing even more of a stool shortage (stoortage?).

Students that didn’t win that period of Hunger Games musical chairs would have to get their stools from other labs – which were all the way in another block. This meant more walking, and less ‘getting an education’.

Tired of this bullshittery, Calvin got in touch with 100% Project. Together they raised RM7,500 in a month to buy more seating for the students. With brand new stools, students no longer had to fight for a ‘seat’ in their education.

Huda Nejim Al­Asedi’s students are Sarawakian, and they come from a variety of ethnic backgrounds. Her students are Iban, Kedayan, Kenyah, Kayan, Penan, Melayu Sarawak, and Chinese too.

For most of them, Bahasa Malaysia is not their first language. Naturally, many of them have difficulty understanding their Malay textbooks.

To work around this, Huda thought of a creative solution ­ getting her students to learn History by building it. Literally.

“Imagine if it is possible to build a big model that maps out the human civilisations and the important places in world history. Imagine being able to make connections of natural rivers and the existence of early trade. If students are able to see, make, discuss, create and feel with their hands, chances are they will ask more questions and they will be more interested to read what is within those books.”

To kick-start her project, she decided to approach 100% Project to raise funds. Together, they’ve raised RM2,518 so far, which is enough to start with, but not to finish.

“If I succeed in this approach with my own class of 39 students, chances are other teachers will follow suit and we can expand our model, attaching new land and ships that could grow over a period of an entire year and beyond.

“Not only will the model be kept for next year, it would be forever etched in the heads and hearts of the students impacted in the entire process.”

Huda – you go girl. If only I had you as my teacher ten years ago, I probably wouldn’t have flunked history.

IRL wishes to thank all the teachers and 100% Project for helping educate our future generation. If you’d like to know more or contribute to 100% Project, visit their official website here. If you’re a teacher and would like to start a project, you can do so at their website too!

Post Views: 42
Previous ArticleDiscriminated Due to Pregnancy – Am I Not Being Hired Because I Have a Bun in the Oven?Next ArticleWhy Positive Thinking Can Be Bad for You

Khairie Apirin
Hi, I'm Khairie, the editor. When I'm not writing, I'm at the gym, or trying to adult (unsuccessfully). I love a good story though, hence this site. If you've got a story you'd like to share, come - tell me. I'd love to hear about it.
Read More Stories
[wprpi by="category" post="5" excerpt_length="0" thumb_excerpt="true"]