I Lost My Virginity to a Call Girl – Should I Tell My Wife-To-Be About It?

We were as thick as thieves, Kamal and I.  One of my childhood friends, used to share everything – from the answers to exams’ questions to family troubles.

A lot of things got in the way after we graduated from school. I went overseas to further my studies while he stayed at home. We lost touch for a while, and life became so hectic that we only saw each other during festive gatherings and friends’ weddings. But they were more like ‘touch and go’ greetings as we didn’t get the chance to talk much.

Last I heard from him was that he’s getting married.

Out of the blue, much to my surprise, I got a phone call from him one day. He asked if we could meet up for a chat. He sounded so serious and said he needed to get something off his chest and was seeking for my advice. Here’s his predicament:

Life was very different for me after high school, as I enrolled into a community college. Dad lost his job, and my parents were always arguing over money problems. I wasn’t really into my studies, as I just wanted to work to help the family’s financial situation.

Thanks to a friend, I got a job at a supermarket and that was when my life changed – for the worse. I got myself involved with the wrong crowd, as I sought solace from all the fights and quarrels at home. It started with just the harmless (well, not really) smoking cigarettes, on to taking ecstasy pills afterwards before one of my friends introduced me to drugs.

And that, led me to another vice – women.

Some of the guys whom I was hanging around with brought different girls every night to this one house where we hung out. I thought they were their many girlfriends, but these girls looked mature, and rather, well ‘experienced’.

I eventually found out they were prostitutes, after seeing friends passing money to them after their bedroom sessions. Being young and green, I was taken aback at first, because I’ve never met any of them before.

I used to think prostitutes would look exotic or glamourous. After seeing them however, they looked rather… ordinary. Just like your next door neighbour, or the ones buying groceries at the supermarket.

Pretty soon I got hooked on them as well. It started off with just hugs and kisses, but things got heated up and I found myself in bed with Maria.

I lost my virginity that night. From then on, I was with different women every night. These women taught me everything about bedroom antics, different positions, orgasm points – all except practising safe sex.

I was probably naïve or just plain stupid, but I was ignorant towards all these things. It didn’t cross my mind to even bother using condoms or asking the girls about their health conditions.

Oh yeah, another thing is that I’ve never had a girlfriend before. I was flattered that they were showering me with attention, though they were paid to do it. They were not cheap, these ladies. Some demanded RM50 for the whole night, while others charged by the hour. I spent everything on them with just a meagre wage of RM400 working at the supermarket.

But I was in lust. I was hooked on these hookers.

Things went like that for about 6 months. It came to an end when I saw one of my friends died of a drug overdose. If that didn’t do it for me, then there was another who got busted by the police during a raid and was charged with drug possession, now still in jail. That sobered me up.

As quick as I started it, I left that life and quit cold turkey. Things got better with my parents’ intervention, as I resumed my studies and graduated with a better job prospect. They too, have worked out their relationship and we became a solid unit again.

Life was good, and I then found Khaty.

I fell in love with demure Khaty the moment I saw her at one of the work gatherings. She’s such a sweet, lovely and well-mannered woman – I’ve never met anyone quite like her.

We started going out and went steady as a couple after a while. She became my world and I brought her to see my parents when things got serious between us.

They loved her to bits, and I proposed. We got engaged as we made a promise to always tell each other the truth and not keep secrets from one another.

But the thing that worries me now is that we are supposed to go for the mandatory HIV check for our marriage process, and I’ve never told her about my past about being involved with drugs and prostitutes.

What if the test came out positive? And I got infected with the disease no thanks to the dirty needles and not practising safe sex?

What if she wouldn’t accept me after I told her about my past? I mean, who would?

Should I just leave it be and fabricate another story about how I got infected? (If I were infected, that is).

Kamal was supposed to go for the HIV test check last week. I still haven’t heard anything from him yet.

I had quite a shock to know these things about Kamal. It’s not my place to judge, though, for everyone has their own life stories.

I always believe that honesty is the best policy, especially in Kamal’s case, as it involves not just his life.  They’d probably survive this If their relationship is solid enough. What would you do if you were in his shoes? 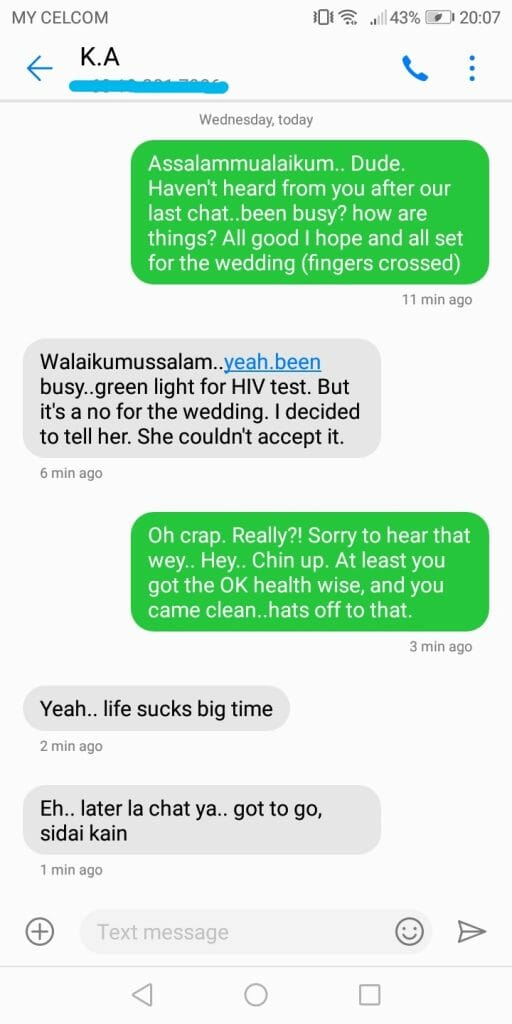 I guess, some things aren’t meant to be. But I’m proud of him for telling the truth. And I took the got to go sidai kain as a sign he doesn’t want to be disturbed. He doesn’t do his own laundry.

For more articles by Nazmie, read You Shouldn’t Lend Money to Friends and Family, and Here’s Why, and My Friend Was a Bridezilla – and It Almost Ruined Her Wedding.

Previous Article5 Best Places to Take Photographs in MalaysiaNext ArticleI’ve Been Dealing with Acne for 13 Years Now. Here’s My Story

Nazmie Nureen
This once-a-sceptic-of-marriage Saggitarian finally got hitched and recently became a mom. She still craves on adventures all around the world, and now she has a few kindred spirits to share them with. She runs. And dreams. A lot.
Read More Stories
[wprpi by="category" post="5" excerpt_length="0" thumb_excerpt="true"]