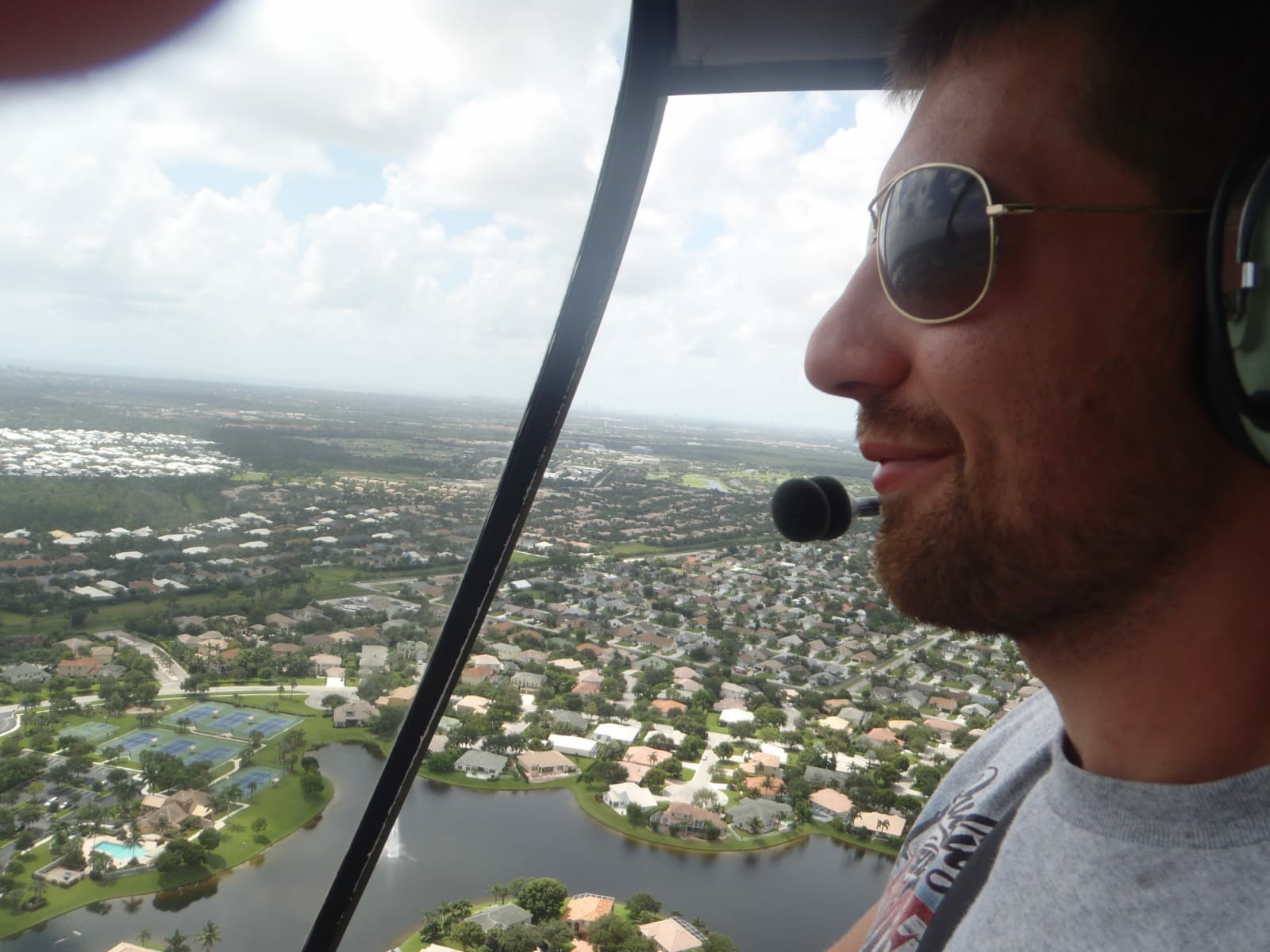 When we think about flying, most of the time we’re referring to aeroplanes. However, when it comes to flying to remote areas, no aircraft has a bigger advantage than helicopters!

We’ve decided to talk to Matthew Bryant, a helicopter pilot attached to Cempaka Helicopter Corporation Sdn Bhd. Matthew has six years of experience, with 700 flying hours across 10 countries under his belt. Currently he does flying tours, as well as piloting official delegates and VIPs.

If you think flying helicopters are only for the rich or priviledged, think again. Here’s a brief background about Matthew Bryant – at 18 years old, he went to fight in Afghanistan as part of the British royal marines.

Unfortunately in one of the combat battles in Afghanistan, he was severely wounded in an ambush. He sustained gunshot wounds to his right arm. There was serious nerve damage, which caused severe limitations in dexterity and strength in that arm.

The injury almost prevented him from being able to fly. However, he managed to pass a special medical examination supervised by a doctor, and went on to train as a helicopter pilot for two years under a scholarship from the United Kingdom army veteran. 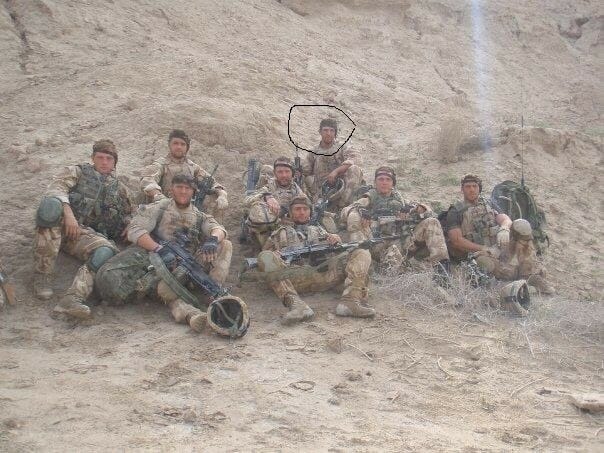 Matthew recalls some of his most memorable experience while flying include flying around the world’s biggest waterfall, Victoria Falls in Zambia while seeing hippos, elephants and lions everyday. He also enjoyed his experience meeting the folks at the longhouse in Sarawak, who rarely get any visitors outside of their own tribe.

Here, Matthew talks to IRL and tells us five things you didn’t know about being a helicopter pilot.

1. A Helicopter Pilot Isn’t the Same as an Aeroplane Pilot – Both Require a Completely Different Set of Skills

Before we talk more about helicopters, it’s important to distinguish the different terms associated with aircrafts. A helicopter is usually known as a rotary-wing aircraft. It’s different from aeroplanes, which are fixed-wing aircrafts.

Both fixed-wing and rotary-wing aircrafts have separate training courses, and are completely different to fly. There are some people who choose to do both, but pilots usually specialise in only one type of aircraft. In Matthew’s case, he flies helicopters for work, while flying light aeroplanes as a hobby.

Matthew says that there’s a slight advantage to being a helicopter pilot, if you plan to be a fixed-wing pilot as well. Apparently, some of the helicopter hours will count towards your fixed wing license, although you’d still need to go through all the required steps to acquire a separate fixed-wing license.

If in doubt, best to check with the Department of Civil Aviation Malaysia (DCA). 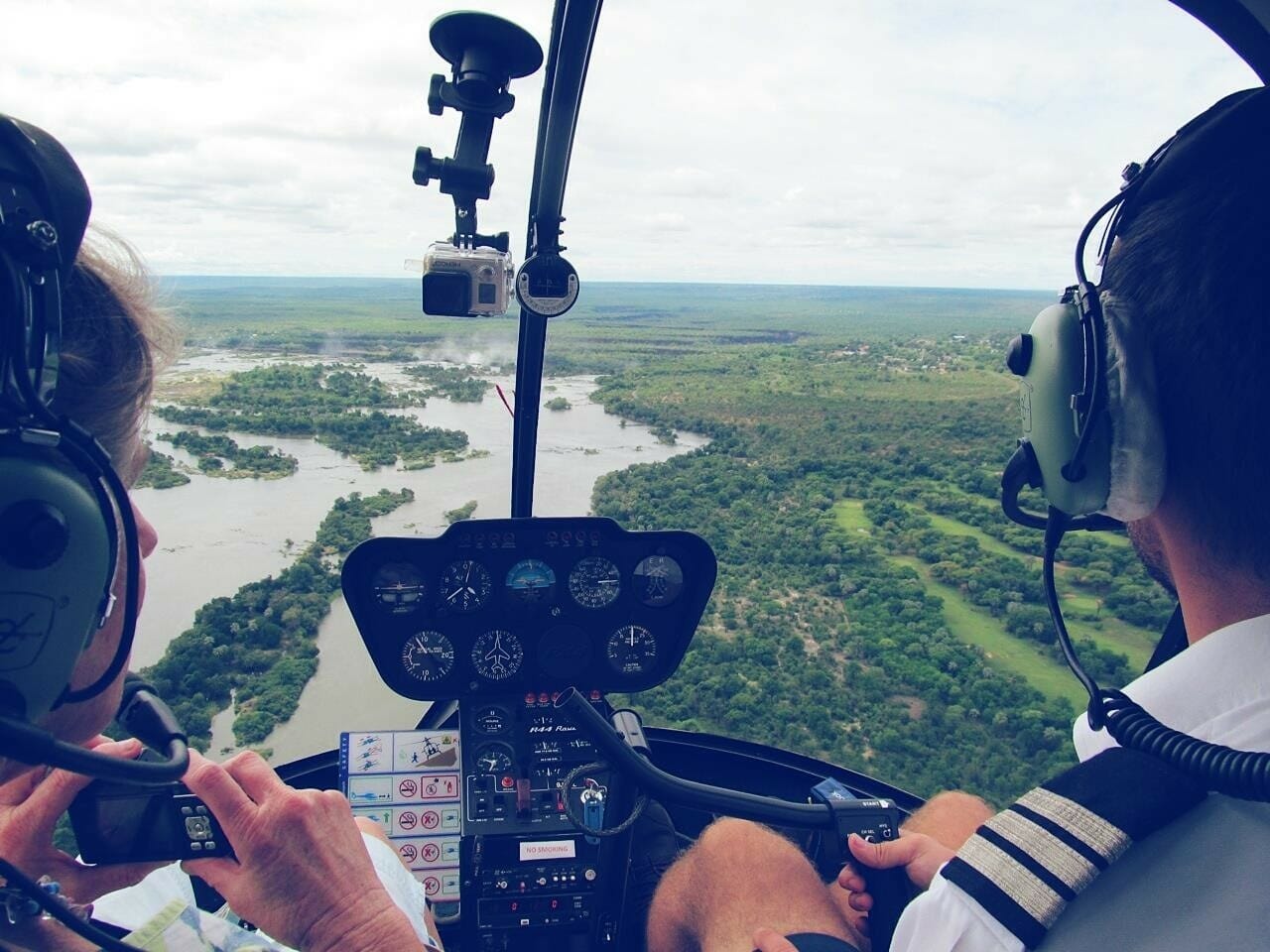 2. To Fly Casually, You Need One License. To Earn a Living, You Need Two

If you are interested in being a helicopter pilot, here’s what you need to do .

First, you need to complete a full medical checkup which includes eyesight, hearing, and a panel of blood tests to be certified fit to fly. These tests must also be done yearly.

Once you’ve passed that, then you can apply for your Private Pilot’s License Course (PPL) which requires around 40 hours of flying. For five of those hours, you need to fly solo.

You also need to pass seven theory exams, finish a cross-country solo flight, and pass a skills examination. The skills examination includes the flying practice, where you’ll be given a destination to fly to. You must plan your own route and perform emergency manoeuvers on request. Along the journey, you’ll also be quizzed on your theoretical knowledge.

Once you’ve passed all these, only then are you qualified to fly a helicopter, whether on your own, or with passengers!

However, if you want to fly commercially, you are required to take the commercial pilots license (CPL) which requires 170 flying hours. This can be done by hiring an aircraft (if you have the funds) or if you’re fortunate, tagging along with other pilots to build up the required flying hours.

The CPL course is 40 hours long, with 14 theory exams. These have topics which range from communications, complex systems and instruments, navigation, emergency procedures, and aerodynamics and physiology.

Although passing CPL means you can finally search for work as a pilot, according to Matthew, most jobs require you to have an experience of 500 flying hours at least, which is much more than the 200 flying hours the CPL course provides. 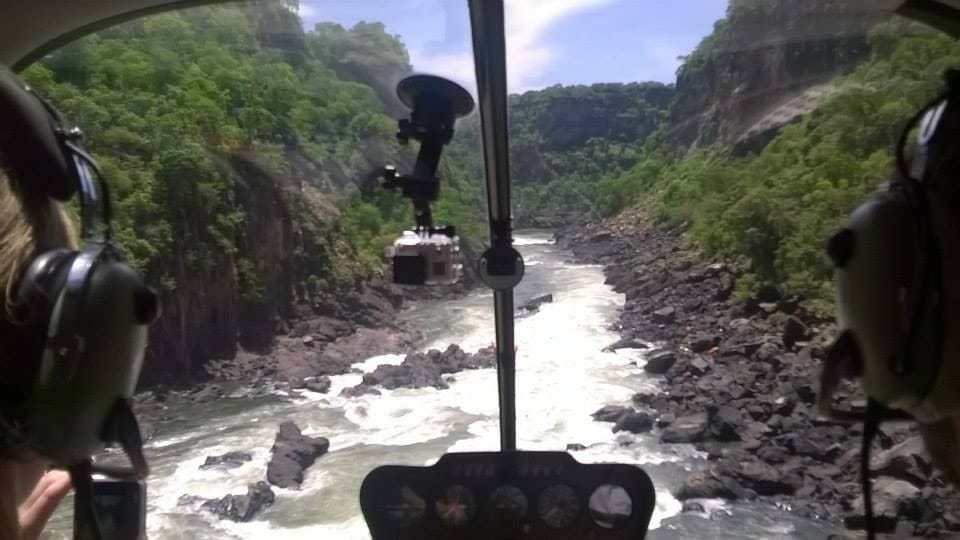 A helicopter can land in remote and difficult areas, such as beaches, hotels, as well as jungles. However, this also means that helicopters will need to navigate through some pretty difficult terrain.

Naturally, this means that handling and landing a helicopter is more difficult than an aeroplane.

Matthew says it’s tricky to learn how to hover and land in confined areas. He also needs to learn how to do auto rotation, which is basically gliding without an engine, a technique used to fly a helicopter during an engine failure.

Matthew says a helicopter pilot is required to train and prepare for emergency conditions also known as defensive flying. It took him few months to learn auto rotation. However, he admits even with 700 flying hours under his belt, he has yet to fully master it.

Another reason why helicopters are difficult to fly, is because unlike planes, most of them don’t have autopilot. Sure, the newer, more advanced models will have autopilot, but most of the helicopter models you encounter as a new pilot will be simpler machines which require constant control and input, every moment of the flight.

You have to manage pedals, collective (a helicopter flight control system which manages the pitch angle of the main blades simultaneously), and monitoring the engine. If you lose focus for one moment, the helicopter could quickly spin out of control. 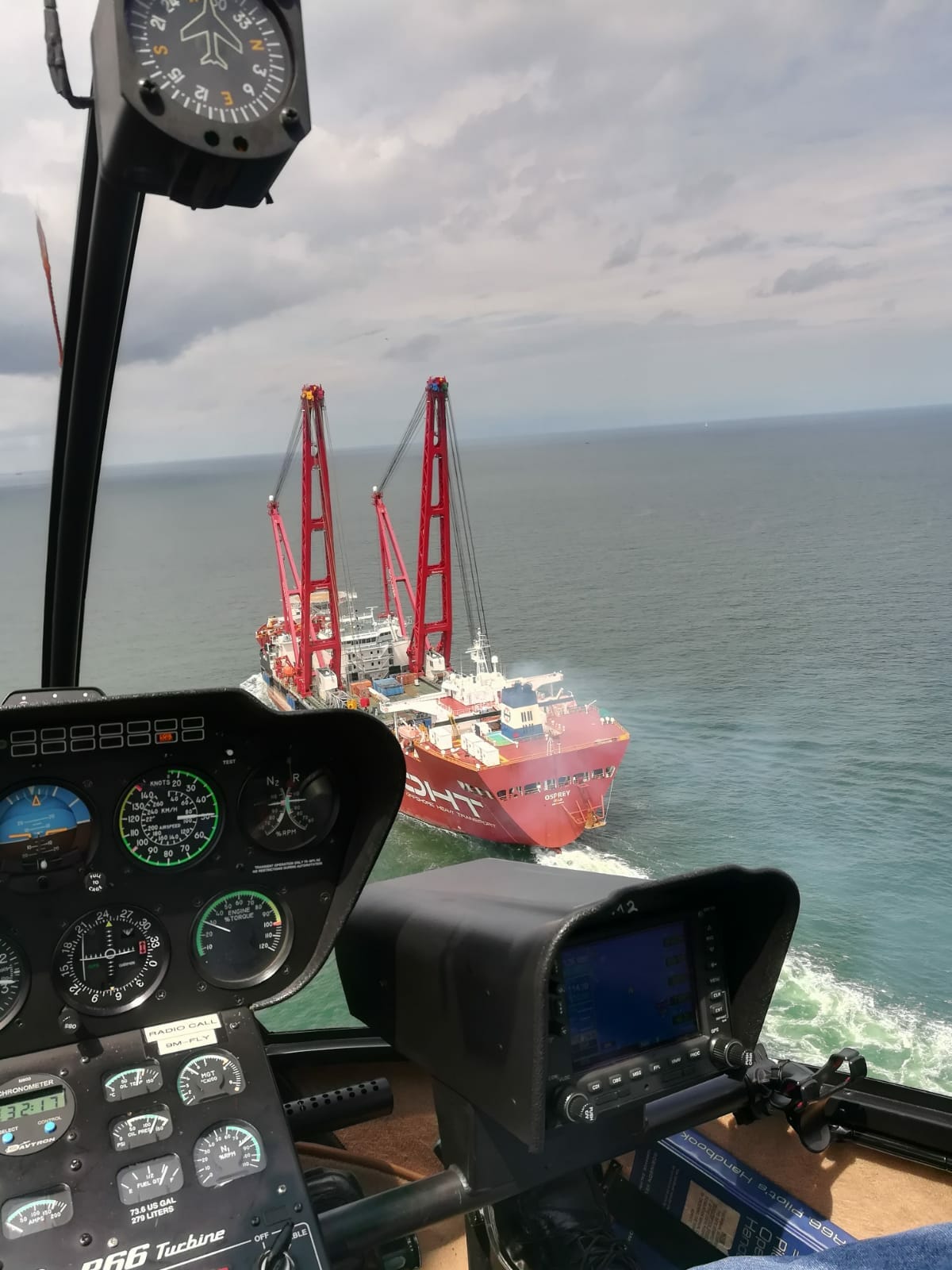 4. Although There Are More Industries Which Require Helicopter Pilots, There’s Still More Supply Than Demand Compared to the Fixed-Wing Industry

Even though he’s in the rotary-wing side, surprisingly, Matthew says it’s the fixed-wing side which has it better. Working in a traditional airline has more job opportunities, better pay, and better career prospects. It’s also the more stable industry.

However, if you’re still interested to be a helicopter pilot, there are still other job opportunities around. Many budding helicopter pilots can still look for work across various services and industries, such as emergency and evacuation services (medicine), aerial photography (design), crop dusting, surveys (agriculture), executive transport and tours (tourism), traffic surveillance (transport) as well as in the forestry and offshore areas.

If you’d like to find out more about the commercial opportunities for a helicopter pilot, you can always head down to the flying schools as well as talk to some of the experienced helicopter pilots. They’d be happy to help! 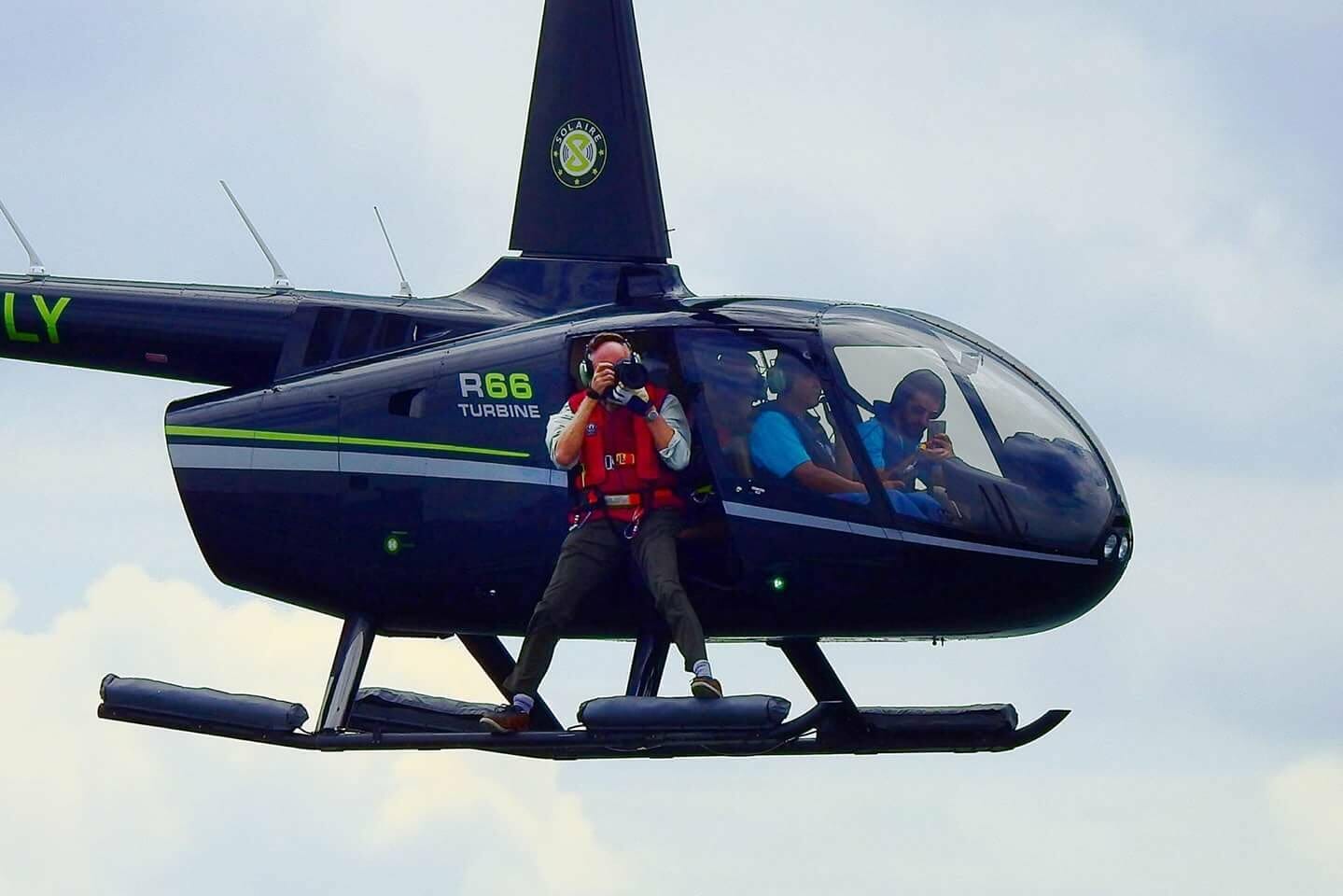 5. You Need Different Licenses to Fly in Different Countries

As a CPL license holder in Malaysia, you’re allowed to to fly locally. However, if you move abroad to work for another company, you must abide by the aviation laws of that particular country.

This might be different from Malaysia’s own rules and regulations. So, although you may be qualified here, you may need to re-qualify for a flying license.

In Matthew’s case, he’s able to fly in Malaysia using his dual American and United Kingdom flying license, which is recognised by the local aviation board. He says Malaysians can follow in his footsteps too – they can obtain their flying license in America by enrolling in an integrated course. However, this method isn’t cheap – the course has a residential training which lasts between eight to twelve months, and costs a whopping USD 50,000. 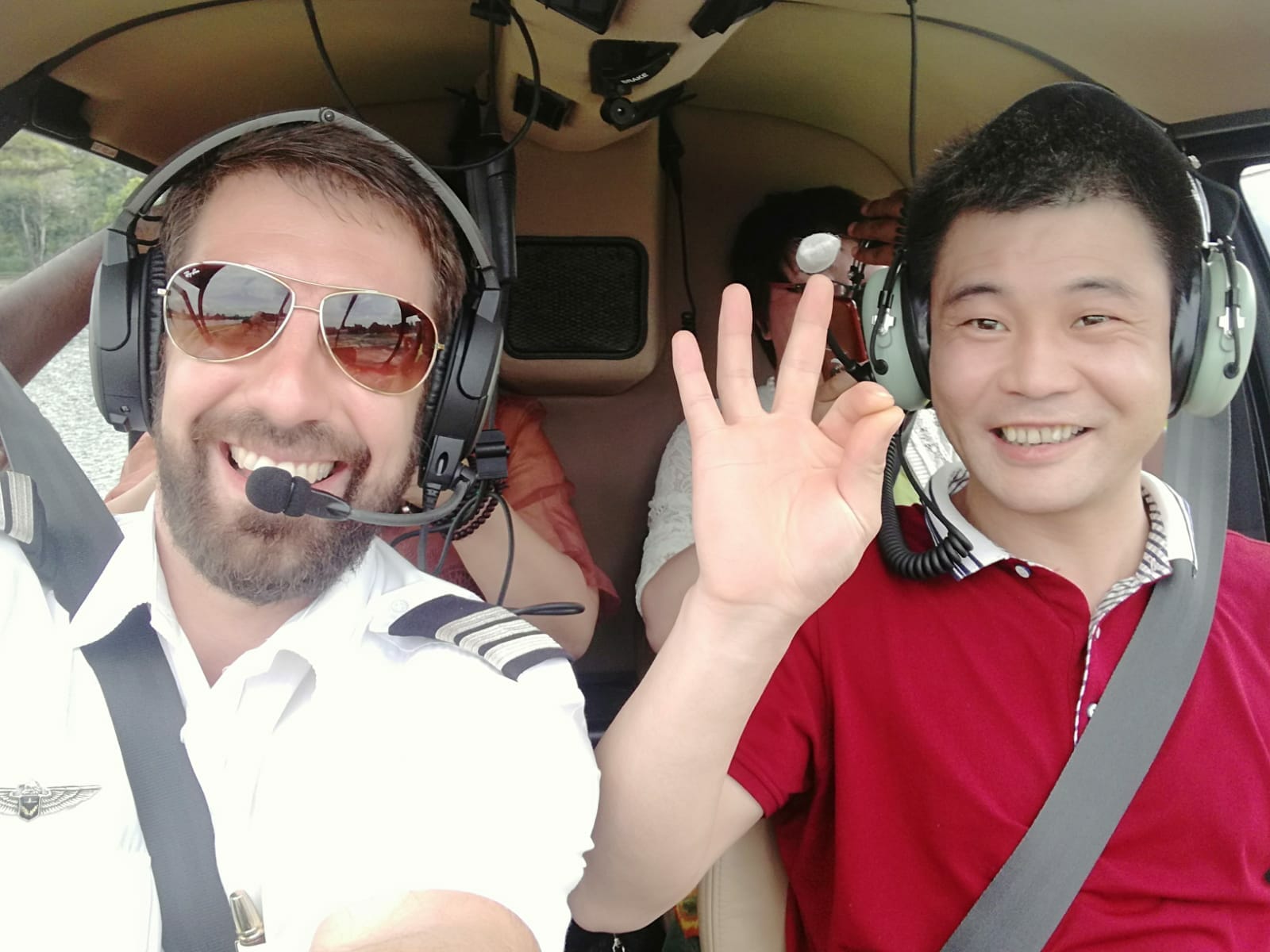 What If You Don’t Have the Funds, or Not Sure If You Want to Do This as a Lifelong Profession?

Matthew says flying requires a lot of commitment and dedication. If you’re really interested in being a helicopter pilot, he recommends beginners to start by getting involved in the operations on the ground. This helps build experience, and getting the odd flight hours (every little bit counts!). Also, you get to earn money this way too!

It’s a longer route, but a great start to acquaint yourself with flying.

Another approach is to get involved in recreational flying such as paragliding, microlighting, ultralighting and gliding. These activities are excellent ways to get started, as it teaches you the basics – they use the same principle of aerodynamics which apply to the aircrafts too.

So, if you’re really interested, there’s no better time to get started. Fly high to your dreams!

For more articles by Mohd Aniq Nazmin, read 6 Things You Should Know Before Adopting Cat(s) For The First Time and 5 Ways to Properly Break-Up with Your Partner.