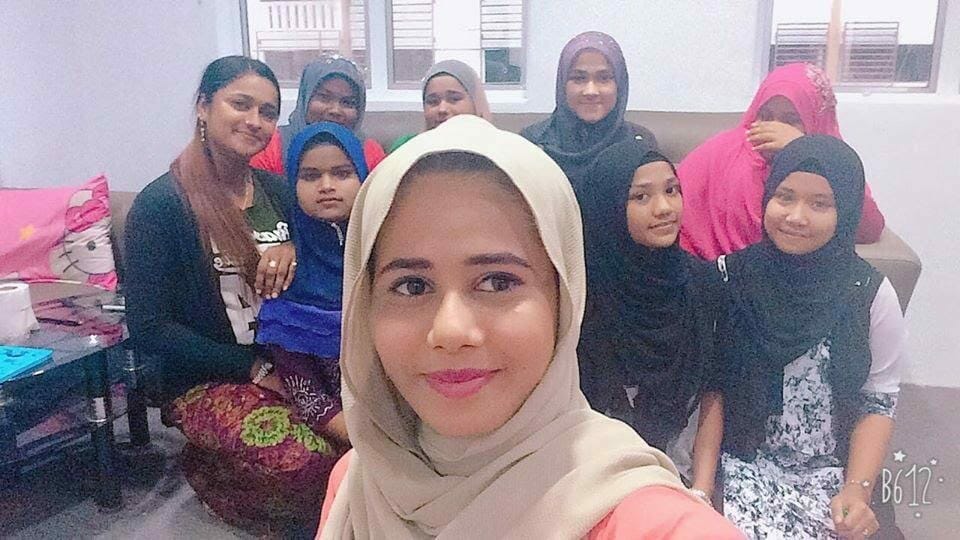 Sharifah Shakirah is a Rohingya refugee who had fled Myanmar with her family to Malaysia, where she lived for over 20 years. In that time, she had founded the Rohingya Women Development Network (RWDN), one of the first Rohingya women-led organizations as well as the first refugee women-led organizations in Malaysia. Sharifah Shakirah was nominated by the US Embassy in Malaysia for the US State Department’s 2019 International Women of Courage Award, and now resides with her family in the US. This is her story.

I was born in Buthidaung Township in Arakan state, Myanmar. Where I come from, home was a living hell – people were raped and beaten; their homes were upturned, their families separated.

When I was 3 years old, my mother took me and my two younger siblings to flee to Malaysia, where my father was waiting for us.

It took us two years to finally arrive in Malaysia. During our journey, my mother got caught by the authorities and was jailed. 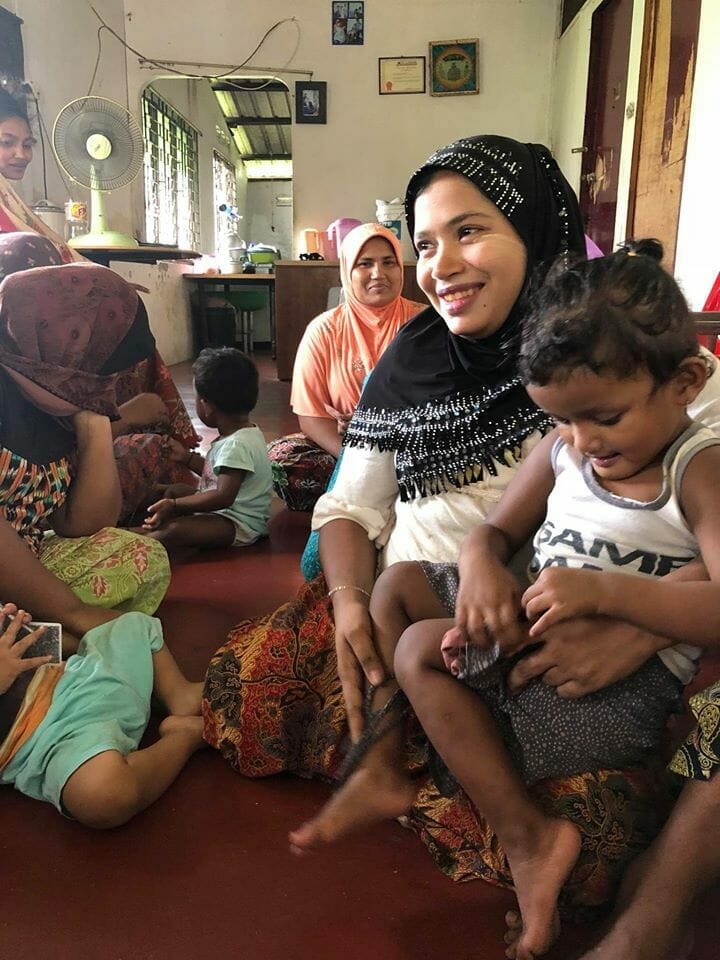 [Visiting the Rohingya women group. Source via the author.]

Even though we were separated from our mother, my siblings and I had to continue our journey to Malaysia.

My father paid money to the person in charge of taking care of us. But they would often beat and abuse us for no reason. Instead of feeding us, they would only use the money for their own personal expenses.

By the time I was 5 years old, we finally arrived in Malaysia. We were reunited with my father, but our mother was still far away, doing her best to get out and be reunited with us as a family.

Months later my mother, despite being beaten and going through many horrific experiences of her own, managed to get out of jail.

Once again, she attempted the perilous journey to Malaysia so that we could be a family again.

Throughout the journey, we have witnessed many traumatic experiences – women being raped, people committing suicide, smugglers abusing our people and more.

Yet, we moved forward because we feared more the horrors that awaited us at home.

My Father Had No Worker’s Rights

Growing up in Malaysia wasn’t easy. We couldn’t speak the language, the neighbors didn’t like us, and I was often bullied by the local children.

Because of that, I was afraid of speaking to anybody for fear of being rejected.

Life was not easy for the rest of the family as well. My father, despite working long and laboring hours, was refused pay by his boss.

Because he had no rights, and no one to speak up for him, he couldn’t do anything and so he was forced to leave empty-handed.

My mother got so sick at one point, she had to be admitted to the hospital, but we could barely afford the fees. We struggled a lot during those times, but we did our best as long as we were together.

One of the scariest memories I recall during my childhood here was the time when the immigration officers were doing a raid at our flat.

At that time, we lived on the 14th floor, and so my parents sought help from the neighbors downstairs.

A kind Malay family was willing to allow our family to hide in their unit during the raid, and so my parents started moving us there.

However, we couldn’t go together in one large group to avoid any suspicion from the neighbors.

So, my father first took my mother and younger brother downstairs to the neighbors, leaving me and my little sister in our unit.

Just as he was about to come upstairs to fetch me and my sister, the immigration officers were close by, and the Malay family had to stop him from leaving for fear he may get caught.

We held on to each other as the immigration officers came close. But no one knocked on our door and so we were safe that night.

Rohingya Refugees Rounded Up On Ramadan

Recently, hundreds of Rohingya refugees are being taken away, regardless of whether they are documented or not, taking even the children and babies.

Even though it is Ramadan, the holiest period of the year, fellow Muslims of our community were forced to sit on the hot concrete under the sun with no water or food together with their young children.

On top of that, despite fears of the Coronavirus, no precautions were taken to avoid the spread of the virus – people were being crammed into detention centers, with no social distancing, no masks, and no hygienic precautions.

It really hurts to see how my community is being treated, to see good friends being taken away and there’s nothing we can do about it.

I couldn’t forget the time a friend from Selayang called me, saying that they were once reminded of the days when they were living in Myanmar. It was truly heartbreaking.

Are We A Burden To Malaysia?

It hurts to hear claims of us Rohingyas being a burden to Malaysia.

However, why is our community being targeted in particular? There are so many other refugees who live here too, such as the Afghans, the Chins, the Syrians and more.

On top of that, there were also claims that our Rohingya leader is demanding citizenship, claims that further triggered Malaysians.

I would like to point out that this never happened and we have never demanded anything throughout the time we’ve been here.

All throughout the time we’ve lived here, we have been helping ourselves, struggling to work long hours to earn a living, and to fight to live yet another day.

If anything, we are the ones who are helping the NGOs by providing them information, acting as the middle person to help others in need.

We just want to have the right to help Malaysia and contribute in our own way by being able to work here legally, start a business and provide jobs for others, paying our taxes and more.

We could contribute so much if we were given the chance. We never wanted to be a burden at all.

However, as much as we love the country and consider Malaysia our home, it is a transit country because no matter how long we’ve been here, or how much we’ve done, we know we will never be accepted here.

To the Malaysians, I’m grateful for the little things we have here. One of the things I am truly grateful for is knowing that I could have a peaceful sleep here.

To go to bed every night with the fear of having someone knocking at your door is a terrible feeling and it is truly a blessing to be able to sleep peacefully. 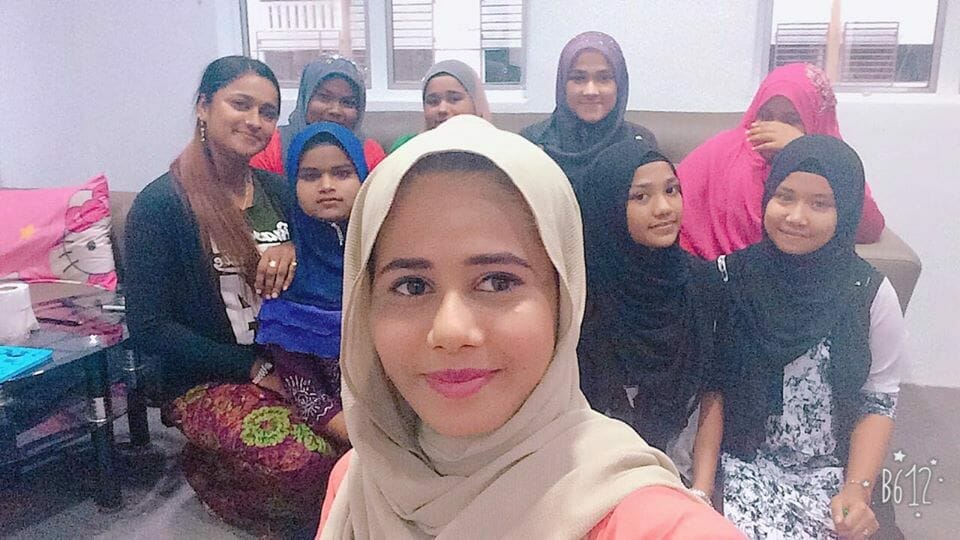 I’m thankful for the amazing friends I made here and being able to help other refugees is truly an honor.

We don’t really need a lot of things. In fact, what really means to us the most is when someone smiles at us.

You know, smiling is a charity, and to be acknowledged by Malaysians is truly a big thing for us, and just a smile would really make our day.

Despite everything I went through, I still consider myself a half Malaysian because I’ve lived here all my life and it is still my home.

I just want Malaysians to know that we want to help, we want to contribute to your country, and more than anything, we want to return home if it’s ever safe again.

Finally, to my fellow refugees, we have faced worse things than what’s going on now. Never lose hope, we will continue to fight and stay strong.

For more stories like this, read: I’ve Been a Foreigner in Malaysia for a Decade — Here’s Why I’m Leaving  and I Was 30K in Debt And Became A Street Beggar — Now I own 5 Massage Parlours.

Post Views: 280
immigrationMalaysia newsMyanmarrefugee crisisrohingya
Previous ArticleHow I Improved My Horrible Conversational English When I Was Studying in the US Within a YearNext ArticleI Met A Guy With a Foot Fetish And This Is What Happened
Read More Stories
[wprpi by="category" post="5" excerpt_length="0" thumb_excerpt="true"]