I admit that when I was growing up and watching TV, movies or episodes that featured dramatic twists of the protagonist finding out their real family roots felt dream-like to me.

Although I did imagine that one day that would happen to me, I shrugged the thought away. I knew my family’s roots: I knew I wasn’t an adopted child.

The adopted child however, was someone else.

My maternal family is relatively small with just my mother, her brother, and my grandparents. I had 2 siblings and 3 cousins, so altogether there were 6 of us. After my grandparents passed away, our family became slightly smaller.

After a regular visit and dinner with my uncle one night, he told us that he had received an email from someone in Australia claiming to be his long-lost brother. There was a phone number attached for us to call.

My uncle felt compelled to call and talk to this person claiming to be his brother.

What if it was a scam? We’ve heard of these scammers claiming to be long-lost relatives with a humongous trust fund in the Cayman Islands and they need someone to help them get their money back.

But there was something about this person that my uncle felt strongly about. So he dialled the number, and all our lives changed forever.

In fact, they’d known since they were young adults, but kept their knowledge of it secret from my grandparents so as to not hurt them with the truth.

As the long-lost brother resided in Australia permanently, they got in touch with their other long-lost siblings and all the families decided to meet up.

It was an awkward first meeting, given that they had only communicated via WhatsApp. This was their first time seeing each other face-to-face.

And so they arrived at the meeting spot, one sunny afternoon. The first thing my cousin said to my long-lost cousin was, “What are you doing here?!” It turns out that they were actually from the same university and had a class together; one was a senior to the other.

Funny how small the world really is.

In that short afternoon, my mother and uncle learned all about their real family roots.

There were 8 of them in total — one in Australia (brother), one in Selangor (sister), and another back in our hometown (sister). Another 2 had passed on. Another had been given away, unable to be located to this day.

All the siblings were blood-related, but my mother and uncle were one of the youngest and they were put up for adoption.

They came to a reasoning that back then, there were too many mouths to feed and their blood parents felt they could not support them, hence they were adopted in hopes of having a better life.

Unfortunately, I did not get to meet my real grandparents and say hello as a grandchild as they had already passed away several years ago. 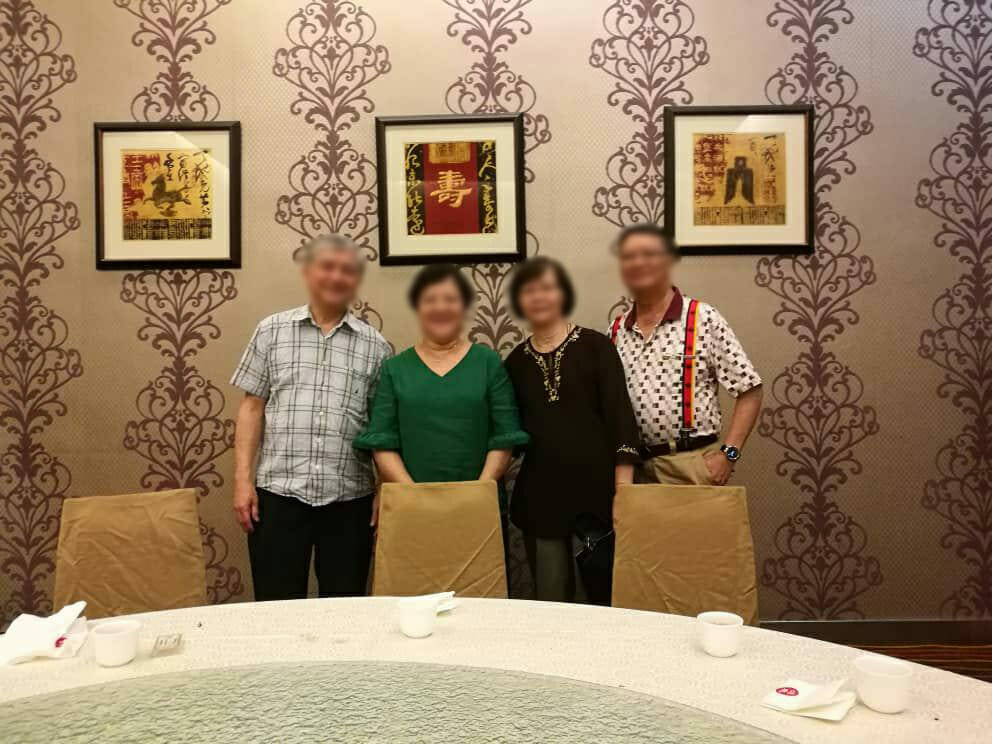 (L-R: Long-lost uncle, my mother, long-lost aunt, and my uncle at their first reunion)

The irony is that they were adopted in the same town and neighbourhood they were born in, so they might have grown up with their blood-siblings without actually knowing it.

As they looked back on their childhood, they began to suspect something was amiss. My grandparents made sure to always know their children’s friends and were very strict about not letting them wander off unaccompanied after school.

Sometimes, the phone would ring and my grandparents would pick it up but nobody would be on the other line, just silence so they dismissed it as a prank call. They also wouldn’t let my parents answer the phone, at all.

In truth, I was not there during the first touching meeting with my long-lost relatives. The first time I met them was after one of my long-lost cousins had given birth to a baby girl, my niece.

I’d never had a blood-related niece until she came along.

Since the revelation, it’s safe to say that we’ve gained a new family that we never expected to.

Although it’s still a bit awkward for us cousins given our large age gap (25-year olds vs 40+ year olds with university-age kids), we appreciate that even in our relatively adult age, we still managed to find each other — people we can call family.

Having found each other for only a few years, there’s a lot to know about each other.

We have different mother tongues as I grew up speaking only English (my mother and uncle were raised by my grandparents who spoke Hakka), while my cousins grew up speaking Hokkien and Mandarin.

However, one similarity pointed out was my resemblance to one of my long-lost cousins (standing next to me in blue in the picture below), and that baby me looked a lot like my niece.

During our meeting, my boyfriend showed my niece a photo of me as a baby. Immediately, she said: “That’s me!” and tried to grab his phone!

(Do we look alike? We share another similarity – we have very little hair.) 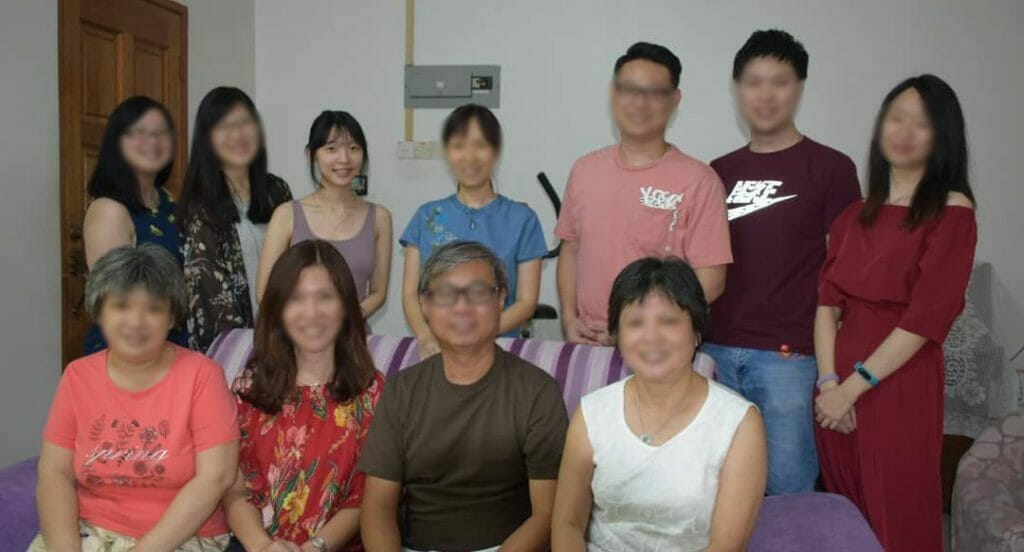 How my parents felt about finding out the truth

For my mother, finding her real family members felt like a dream of hers that came true given that she had harboured the truth for decades.

They don’t blame their real parents for putting them up for adoption though and in fact, they are grateful.

They had wonderful opportunities that they might not have gotten if they were not given up for adoption (ie: going overseas, higher education).

Although they knew they were adopted, they never told my grandparents. Back in those days, adoption was common but hush-hush.

Perhaps the truth was hushed because they were worried that their adopted children would retaliate and go back to their real parents. Or worse, consider their adoptive parents the enemy.

I think the opposite though. If you as a parent, whether adopted or blood, have done a good job raising your child, you shouldn’t need to fear them running away and abandoning you.

Because family is what we’re brought up with and not necessarily what we’re born with. That’s why sometimes, we consider our closest friends our family. 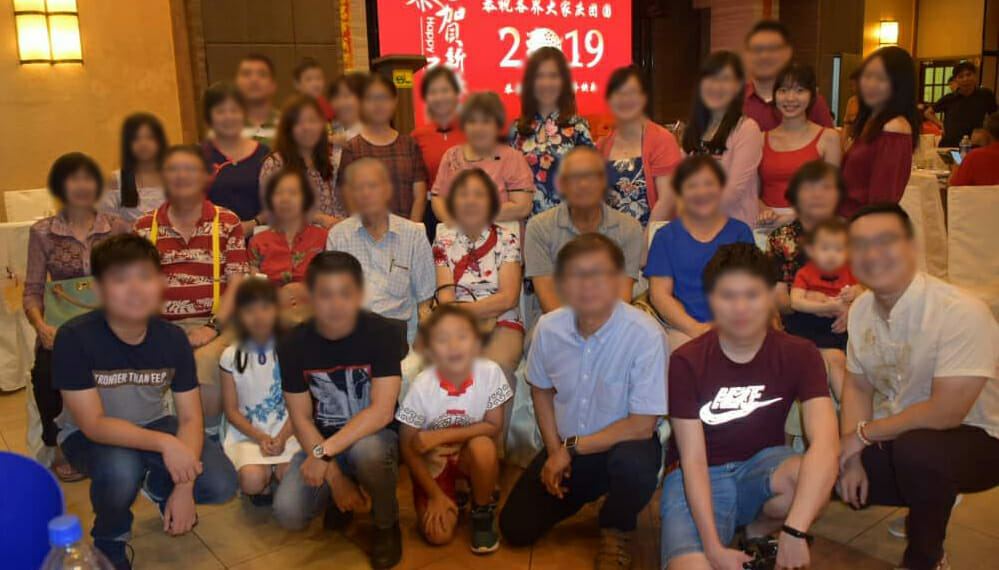 (Our CNY reunion dinner in 2019 at our hometown)

Before, during Chinese New Year, we’d just take up 1 table for our reunion dinner. Now, we take up 4 tables with 3 generations sitting together.

Granted, we don’t see each other very often, but that doesn’t take away the fact that they’re family. We are family.

And it’s one that I’m happy to find.

For more stories like this, read: My Sister And I Were Separated For Almost 3 Decades. This Is How We Reconnected.