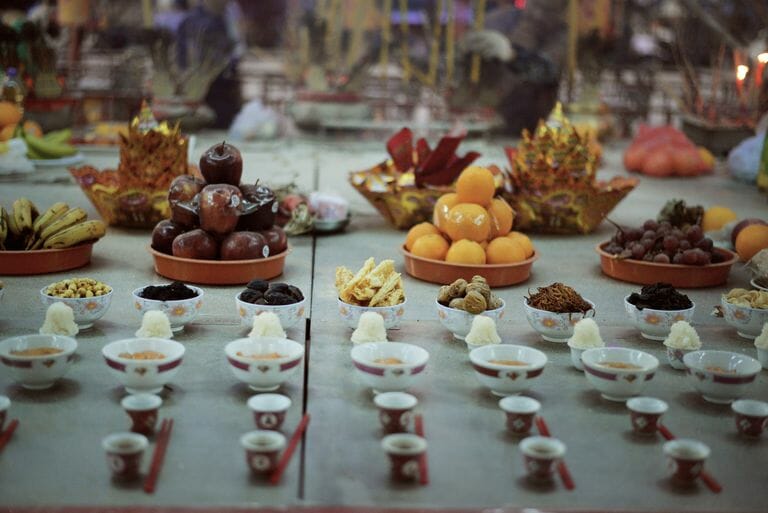 Ever since I was a young child, I was scared of everything that has to do with the supernatural.

I would be terrified when night fell, because as Grandpa said, it would be when the ghosts are most active.

Anxious about being possessed by demons, I would lay awake at night in my bed, and end up sleeping on the floor of my parent’s room.

As I grew older, I still believe in some of those customs and taboos.

Although some of them sound like mere superstition, I feel like it’s better to do so, just to be on the safe side.

So what does ‘Hungry Ghost’ mean?

Ghost Festival Month, or more commonly known as the Hungry Ghost Festival, is held during the seventh month of the Chinese calendar.

During this time, the Gates of Hell are opened up and ghosts will roam the earth freely, seeking food and entertainment.

According to folklore, the ghosts in hell have to grow long, thin necks as punishment for their sins.

These necks prevent them from eating anything, so when they’re out in the mortal realm, they are looking to feast.

Family members offer prayers, food, and hell notes as offerings to the ghosts to care and appease them.

If you do this properly, you will be blessed with good fortune like winning the lottery or having good business.

So what are the things Chinese people do to appease the ghosts? Here are the 3 main things:

1.We Offer Food To Them

The morning of September 15th is the “official” Day of the Ghosts.

I would be woken up by the smell of burning incense, and also the delicious smell of
char siew and siew yok, which my grandma said is a must-have offering. 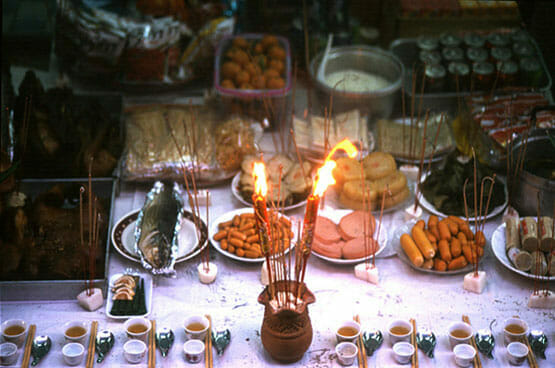 The food would be laid out in front of our house for a period of time, and after that, we would eat the rest of the food.

We weren’t allowed to touch the food that has been laid out, for fear of getting in the ghosts’ way.

In any case, food left outside would end up being tasteless, as the ghosts would have already consumed the delicious aromas wafting down. 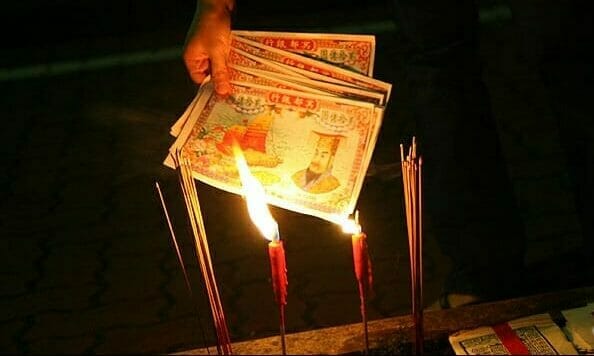 The most visible custom of the Hungry Ghost Festival is the burning of paper money, called Hell notes. These are meant to be used as a form of currency in Hell.

The hell notes allow the deceased to purchase luxuries and necessities in order to have a more comfortable afterlife.

There is a saying: “If you burn rubbish, your ancestors will get the rubbish you burned”.

So instead of burning rubbish, Chinese burn things they believe their relatives need. The more you burn, the more wealthy your relatives would be down there.

Burning isn’t just reserved for hell notes. You can burn paper cars, paper houses, and even paper maids for the deceased. 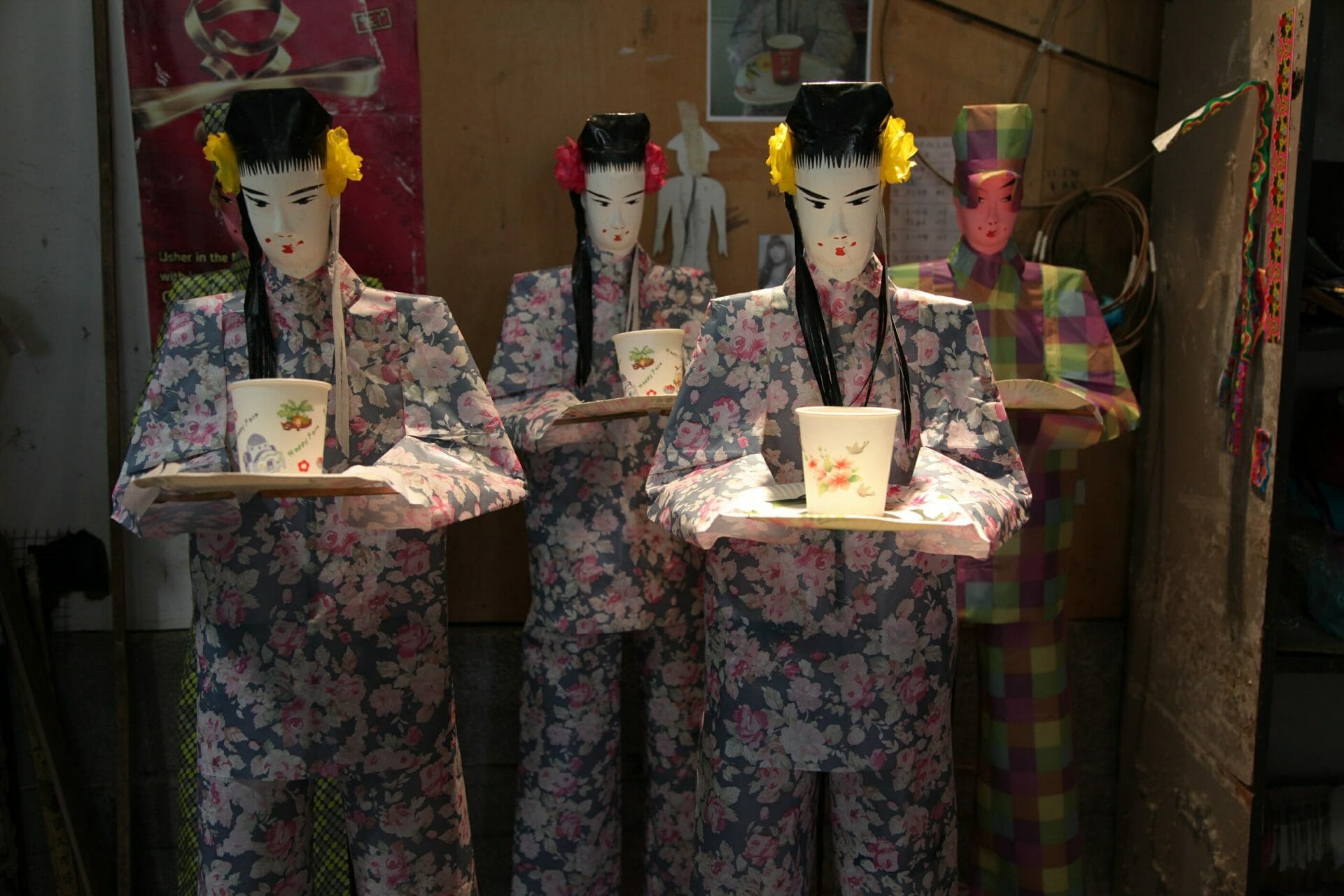 It’s a belief that the dead continue to dwell in the natural world and they have the power to influence the living’s fortune and fare.

So this burning is a form of bringing good fortune to one’s own business.

That said, with all the environmental impact of open burning, some Chinese are choosing to write a check instead.

3. We Build Getai For Them 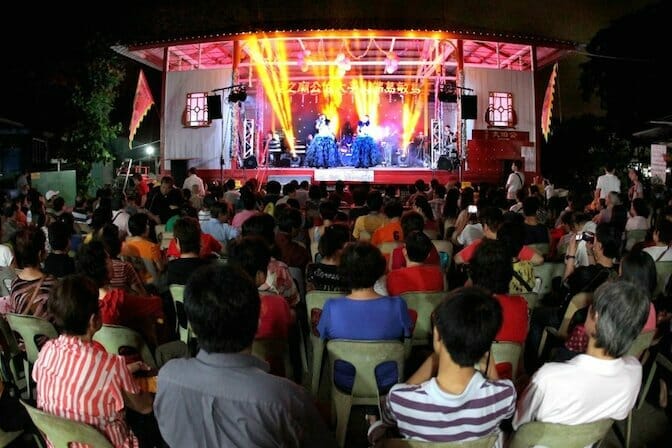 If you’ve ever walked past what sounds like an outdoor karaoke performance with lots of smoke, gaudy lights, and disco music, that’s a Getai.

The performances feature tales of gods and goddesses, lewd stand-up comedies, sometimes even puppet shows. Each tale is accompanied by lots of songs and dances.

And without fail, the performances are always held at night with the volume up at maximum.

As a Chinese, I’d like to apologise for the noise. It’s just that this entertainment is loud simply to attract and please those wandering spirits.

Grandma said if you refer to them as “ghosts”, they will know you’re talking about them. So instead, I would call them “good brothers”.

There will be chairs lined up facing the stage, for both the ‘good brothers’ and mortals to enjoy.

It’s considered bad luck to sit on the first row as it’s left empty for the special guests. You might get bad ailments.

During a Getai performance, people would pray to the Chinese deity “Da Shi Ye” or “Guardian God of Ghosts”.

They would make prayers and throw offerings at a gigantic paper statue of the Da Shi Ye before setting it on fire.

Chinese Taboos To Avoid At Night

My grandparents would tell me the long list of taboos and customs that I had to follow this month. Here are some of the more well-known ones:

1.Don’t Walk Around Late At Night

Get home before dark and avoid late night outings for the entire month.

Ghosts are said to be stronger at night and will prey on lone victims, so you are likely to be followed by a ghost, or worse, possessed by one. 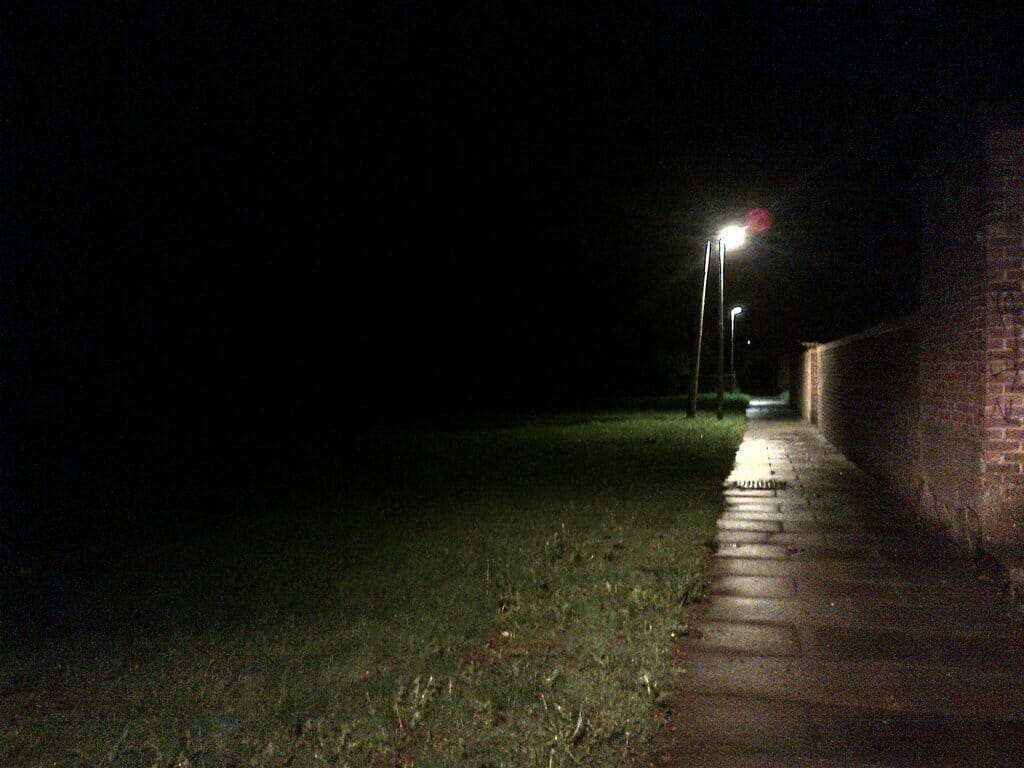 When someone pats you on the shoulder or calls your name at night, don’t turn around.
This is a trick that the ghosts use to possess you.

Children are more susceptible to being possessed, so keep watch on your child, and don’t let them play outside after dark.

Pregnant women are advised to not go out at all, because the ghosts are especially attracted to foetuses.

2. Don’t Hang Your Clothes Outside At Night 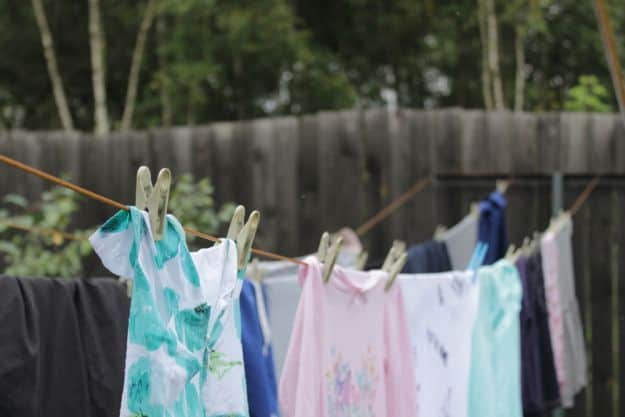 One particular taboo that has stuck with me is to not hang your clothes outside at night.

As clothes look like human bodies, the restless ones will cling to them, hoping to regain their human form.

Another theory is that the ghosts seek clothes to keep warm as it’s very cold in the underworld.

Anyhow, don’t do laundry at night, or you just might find that something else has the same fashion sense as you!

3. Keep Away From Bodies Of Water At Night

It is said that the people who died in bodies of water will become the most terrifying of ghosts.

Keep away from any bodies of water at night (or at anytime at all, really) as it leaves you vulnerable to ghostly interception. They will lurk in the water and will only get reincarnated if they bring down someone to replace them. Basically, a soul for a soul.

Chinese Taboos To Avoid At Day

1.Avoid Any New Milestones At This Time

Basically it’s inauspicious to do anything noteworthy or life-defining during this time. Generally people avoid milestones in this time as it is believed to be bad luck.

If you plan to move into a new house or getting married in the seventh month, it would be a huge taboo to the older generation!

Any major events will be messed up by mischievous ghosts. You might even have some uninvited guests attending your big day.

Businessmen would also avoid buying property or closing business deals as it will only bring bad luck.

People avoid travelling, especially going on a cruise or anywhere near bodies of water with reasons mentioned above.

Businessmen would avoid riding in airplanes in fear of any mishaps caused by mischievous spirits.

3. Don’t Touch Or Mess With The Offerings 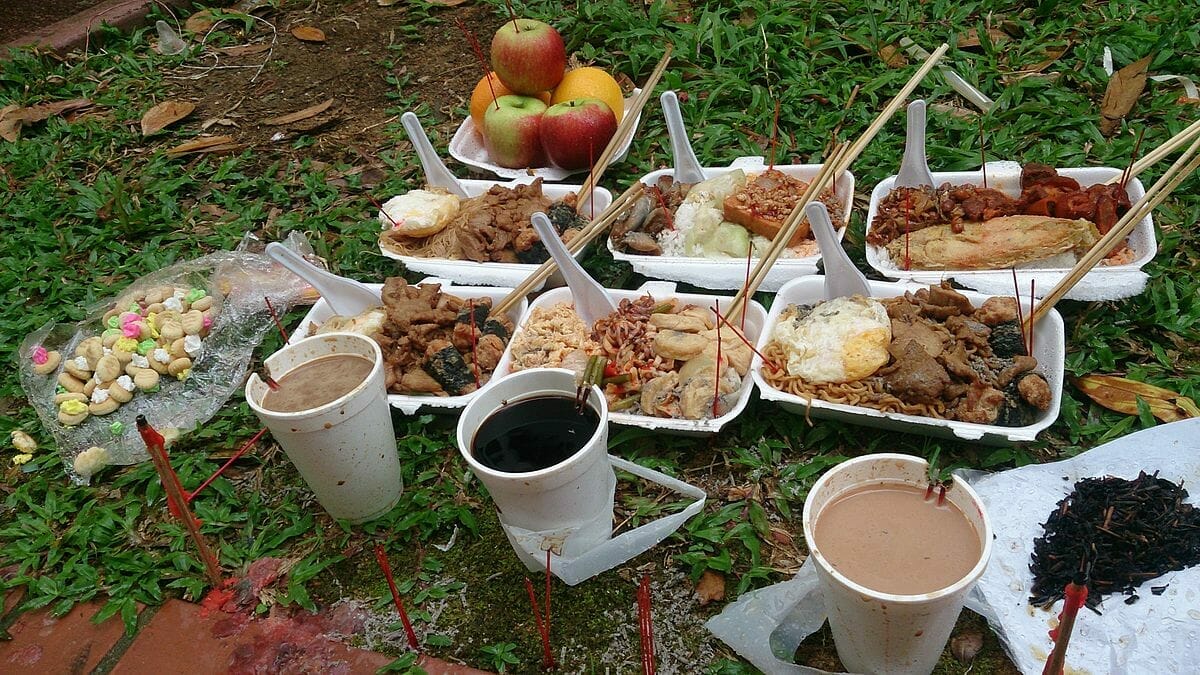 When people set up offerings next to the road or other inconvenient places, though they may be in your way, you should never mess with them or move them without permission.

If you do, you’ll be offending the ghost nearby and they’ll not hesitate to take it upon themselves to punish you for your audacity to mess with their things.

4. Don’t Step On The Hell Notes

Try not to step anywhere near the hell notes. Stepping on money is considered rude in Chinese culture. In the event that you do, you’ll have to apologize immediately to the ghost.

5. Don’t Stick Your Chopsticks Upright In Your Rice

Here’s a famous one: When you’re eating, do not stick your chopsticks upright in your rice as it looks like an offering to the ghosts.

They may even possess you to devour the rice. Instead, place your chopsticks down horizontally on top of the bowl.

And there you have it, a complete breakdown of the stuff that goes on during Hungry Festival month.

For those of you who practice other beliefs, these rituals will not affect you in any way, so there’s nothing to worry about.

For other articles about Chinese culture, read 8 Signs Your Family Believes in Chinese New Year Superstitions and I’m a Chinese Girl Raised in a Traditional Chinese Family. Here’s My Story. 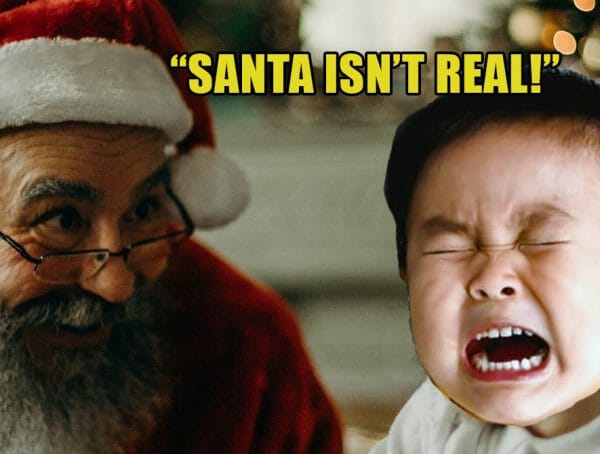 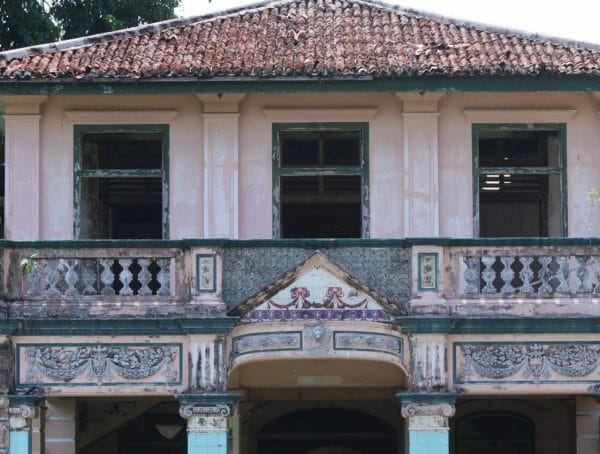 761
Life & Everything Else
I Used To Live In A Haunted House At Happy Garden In Klang, Here’s What Happened 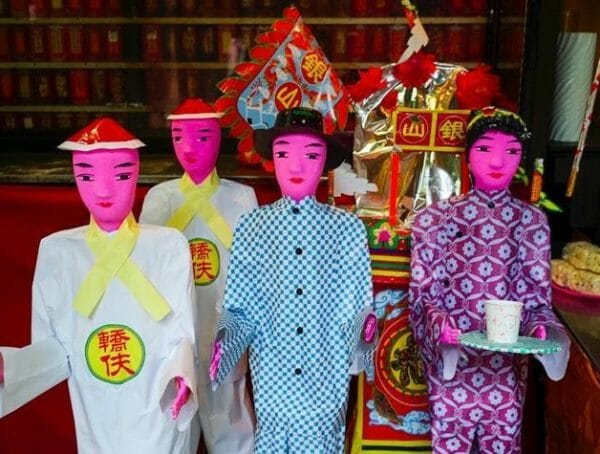 356
Life & Everything Else
My Tua Ee Po Was The Center Of Every Hungry Ghost Festival, And Now She’s Gone

We have LRT, bike lanes, and trains. So why aren’t we using them?