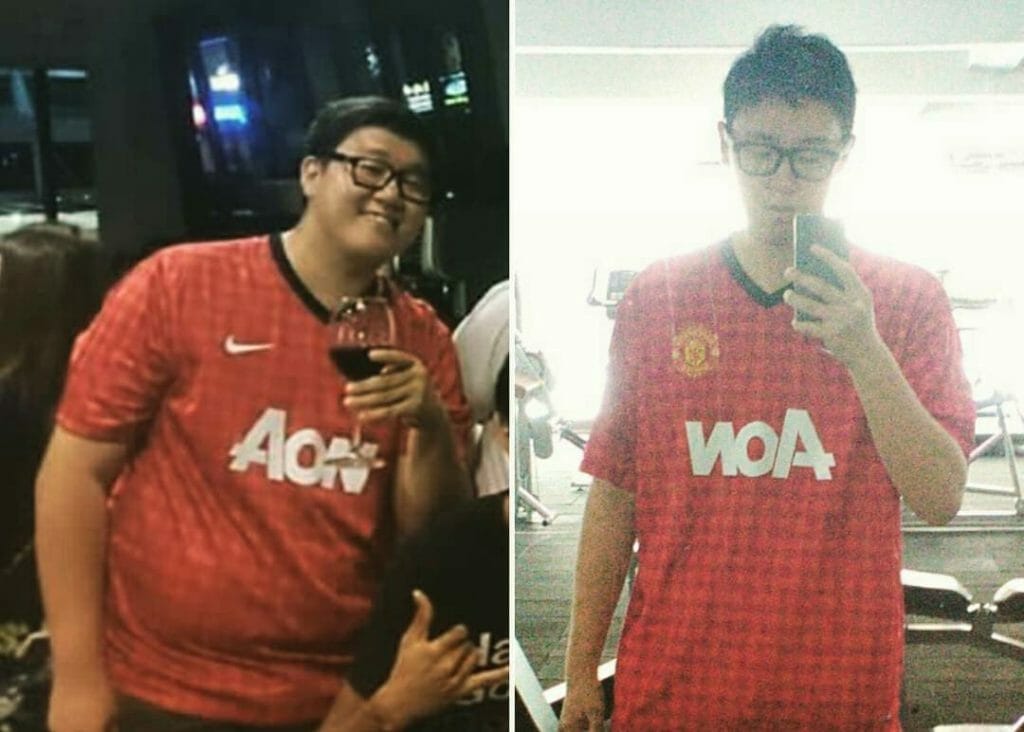 Body shaming is hurtful and happens in Malaysia more than we think. However, these four Malaysians took charge of their lives and didn’t let it bring them down. Read on to hear their stories!

‘Lifting’ yourself back up

At his heaviest, Peng Seong weighed 127 kilograms. He was always being made fun of for his body weight. Not once did anyone defend him when he was body shamed.

On one occasion, one of his friends said the elevator couldn’t handle his weight. His other friends simply laughed at the joke. He remembers feeling horrible about it but didn’t say anything.

However, two years ago, he made a life-changing decision. He ended up losing 40 kilograms, bringing his weight down to 87 kilograms!

Funnily enough, it wasn’t the constant teasing which sparked him into action, although it did play a role. The life-changing moment came when he saw an old uncle carrying a gas tank while hiking, and yet still managed to overtake Peng Seong.

It was this awakening which made him decide to hike every day, which resulted in his transformation.

Lily was raised in an Asian family, who were typically strict and harsh. She was young when she faced her first body shaming experience – it came from her own father.

Her father called her fat despite her having a normal sized body with slight curves. Her siblings were spared because they were skinnier and fit the typical Asian body image of being slender.

Lily doesn’t agree with her father’s views. She thinks she wasn’t fat at 14 years old. She only weighed 50 kilograms at 165 centimetres!

Despite being affected by her father’s lofty expectations, she eventually came to terms with the Asian way of parenting. She doesn’t necessarily agree with it, but she understands that all parents have their own way of parenting. For herself, she tries not to harbour any ill-feelings towards her parents.

So, she continued following her parents’ wishes in her career, health and other aspects of her life. This changed in her mid-20s, when she decided to take charge of her own life and stopped her career in accounting. It was a shock to her parents who own an accounting firm themselves and had hopes of Lily taking over.

Currently Lily’s happily pursuing her own business in the fitness and apparel industry. She still remembers her body-shamed days, so now she makes tutus for all sizes!

Stopping the cycle of hurt

Irene’s body shaming story starts with her own mother. Her mother was bullied at the all-girls school she attended, because of the weight she gained. She wasn’t naturally fat – the weight-gain was because of the medication she took to treat a growth in her neck.

Eventually, she projected it onto her daughters. For her, the ideal body type was Twiggy – skinny and slender, not much in the way of hips and breasts. She told her daughters to limit their food intake and would remind them constantly that people don’t like fat girls.

When Irene hit puberty, she developed breasts and hips. Her mother was horrified. Irene had to meekly ask her to bring her shopping for a proper bra. When they found a bra that fit – a 32C – her mother’s face was dark.

At home, her mother muttered that the sudden breast size increase was due to weight gain. This made such an impression on Irene that she developed borderline anorexia. She exercised a lot, but only ate white bread or a bowl of porridge 1-2 times a week.

She became pale and lethargic. She slept through most of form 4 and 5 and became severely depressed. Her sleeping cycle was messed up too.

At first, Irene attributed all those to depression and bipolar disorder. But now she realises that the starving was a major contributor to her unstable mental state.

“It (starving) makes you unable to regulate your mood hormones well, more so if you’re already prone to mood disorders in the first place. It affects your sleep too, cause your body goes into starvation mode and keeps you up in a desperate bid to find food.”

Irene dropped to a 32A. She suspected the drug problem she eventually developed was because it kept her effortlessly skinny, while also masking her depression.

“One year when I came back from university, my friends and my cousin were shocked. When I wore a halter neck top, my spine and ribs were showing from behind.”

Normally her mother would compare them both, saying that Irene was heavier than her. It wasn’t a fair comparison since Irene was taller than her by about half a head. But that year when she got back, it was so bad that it was the only time her mother didn’t say anything about her weight.

After years of unhealthy programming, Irene’s turned over a new leaf. Fitness and nutrition are things that Irene is now passionate about. She no longer alternates between bingeing and starving herself.

In fact, it’s improved the relationship between her and her mother too.

“She joined the gym with me earlier this year. Interestingly, she’s starting to come around too. She now accepts that there are many different body types, and all can be beautiful as long as they’re fit and functional.

“So, this is my story on body shaming. I’ll never be a runway model, but I’m finally happy with what I have.”

Diane was recovering from a previous relationship and threw herself into a newfound passion – kickboxing. She loved the sport because it made her happy and confident. She went to the gym every day.

That’s where she met Andrew, a fellow student in her kickboxing class. He would offer to drop her home after training when it was dark. It was a nice gesture which made Diane feel loved and cherished.

They met quite often and as the weeks progressed, they eventually started dating. About six months into the relationship, he introduced her to his whole family and asked her to move in with him in their family home.

That’s about the time when things started to change.

He started comparing Diane to his brother’s girlfriend. He said they were all pretty girls, slim arms, long hair, nice makeup and always dressed demurely (as opposed to Diane who wore activewear most of the time).

One day Andrew looked at her and told her to do less kickboxing since her muscles were starting to bulge. He even said that out loud at the gym, which forced her instructor to intervene.

The instructor said “For God’s sake, if you aren’t happy with a kickboxer’s muscled body, why the hell are you dating a gorgeous one? Lots of guys dig this girl, you better count your stars man!”

He used to tell Diane that she was pretty, but he stopped doing that. Instead, he started calling her names. He would say that she was stubby, looks like a man from the back, fat, etc.

They even stopped having sex. He chose to game instead.

“After 3 years I felt dead inside. He belittled everything about me, from the way I looked, the friends I had, my career, family etc. He kept saying I was weird, and that no one would love me as much as he does.

“When I started to spend more time with friends and he accused me of cheating. So, I broke up with him.”

Today, Diane is happily married, and her husband appreciates everything about her – including her strong, muscular shoulders!

Have you been body shamed before? How did you deal with it? Let us know in the comments below!

Post Views: 34
Previous ArticleHow To Discover The Job You LoveNext Article5 Ways To Know If You Have A Future With Your Partner In Malaysia
Read More Stories
[wprpi by="category" post="5" excerpt_length="0" thumb_excerpt="true"]