The names in the story have been changed to protect the identities of the participants. All events are true according to the author and are not affiliated with IRL.

They say if two people love each other, they will find a way to make it work.

This is the story of Aisha, a Malaysian Muslim woman, and Vinesh, an Indian Sikh man, navigating the obstacles of strict religions, visa complications and a global pandemic.

Born in Malaysia to a loving Muslim family, Aisha is a strong and outgoing woman.

As the main breadwinner, she takes care of her father, sisters and little nephews. While she upholds the rules of Islam, she is open-minded and respectful of other religions.

Vinesh was born in Punjab, India. As the eldest son in his family, he grew up to be quiet and polite, always obeying the wishes of his adoptive parents.

He started work in Malaysia in 2012 after completing his studies in Singapore.

One night in 2014, Aisha and Vinesh attended a mutual friend’s birthday party. There, they crossed paths and started talking.

Being the caring person he is, Vinesh took on the role of the responsible older brother in the group. He was also observant and respectful, traits Aisha liked about him.

The two exchanged numbers that night and the next day, Vinesh texted Aisha. A friendship was born and around a week after, the two met up.

Vinesh was working night shifts at a bar at the time and with Aisha working a 9-6 job, they were left with only a short window of time in the evening to catch each other.

They ended up meeting in Aisha’s car that day and all they did was talk. 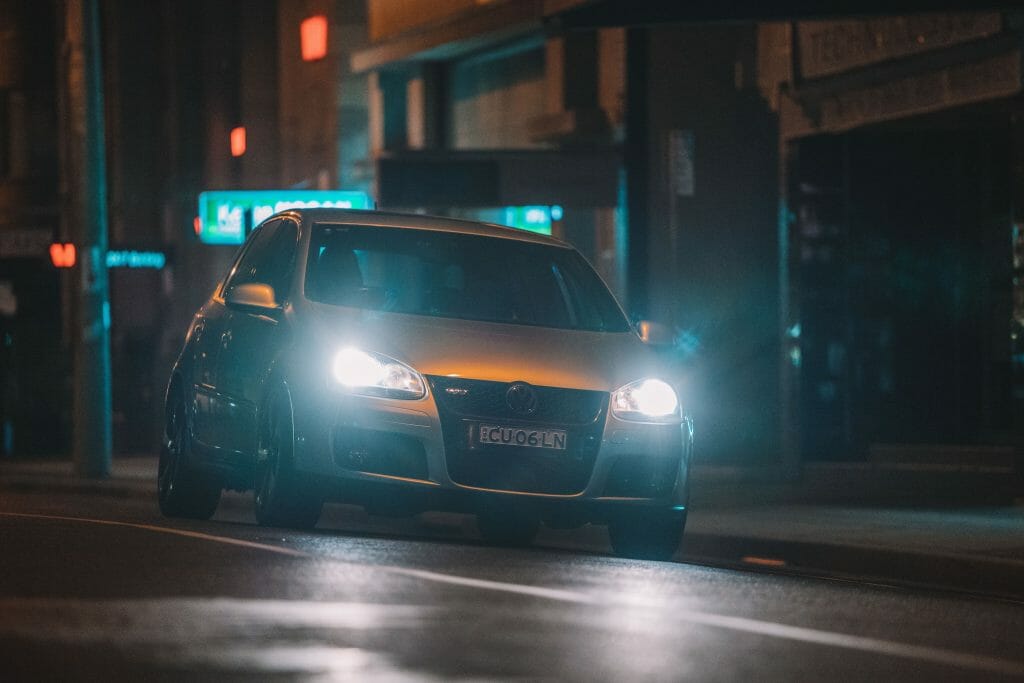 [Photo by Angus Gray on Unsplash]

Vinesh had an accident.

Around a month into their friendship, Vinesh met with a motorcycle accident which left him with a broken leg.

Hearing this, Aisha showed up at his door with a comforting bowl of Bubur Ayam McD.

While she didn’t think much about her feelings for him at the time, simply caring for him as a friend, Vinesh was already falling for her.

Months went on. As they started seeing more of each other, they started pondering the possibility of a relationship.

But one concern weighed on Aisha’s mind.

With her heart set on marriage since young, she had to be honest with Vinesh.

“We have different religions,” she said. “If we were to get married, you’d have to convert to Islam.”

“Let’s not think about this first,” Vinesh responded. “Changing religions would be disrespectful to my parents, but when the time comes, I would consider it. I don’t want to give you any promises but I truly am in love with you.”

“I love you too,” Aisha said. “But if a Muslim man were to propose to me or if my parents were to force me to get married, I would say yes.”

So despite being afraid of how their families might react to them dating outside their faiths, they decided to start a relationship — one they kept secret.

With time, however, as Aisha fell deeper in love with Vinesh, she knew she could no longer let go of him with ease.

She never asked him about his intentions of marrying her. She wasn’t even thinking about marriage anymore.

She was happy to go with the flow. As long as it was with him. 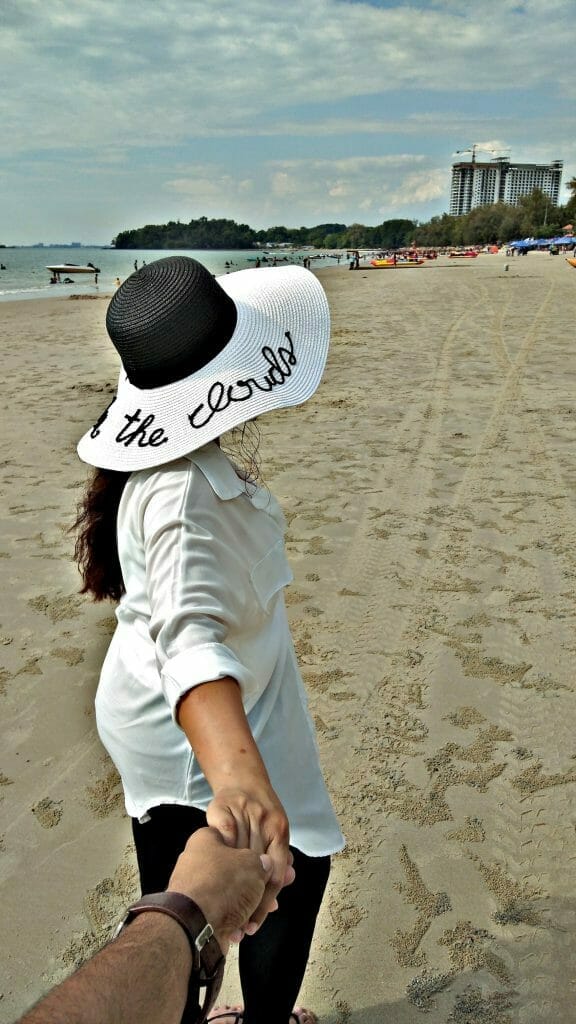 On holiday in Port Dickson in January 2019

By June 2019, Vinesh was caught in limbo. His work visa was fast expiring and his new visa had not been approved.

Seeing how stressed he was, Aisha said, “Let’s just get married so you wouldn’t have to worry about visas anymore.”

“No, I don’t want our marriage to be for anything other than love,” he responded.

Aisha and Vinesh had a long talk that night, and at the end of it, he suggested they give each other more time to think about it.

The next day, Vinesh called Aisha during her lunch hour.

They were in the middle of catching each other up about their days when Vinesh asked, “Are you sure you want to marry me?”

He continued: “I really love you, but…I don’t want you to make the wrong decision.”

Aisha replied: “I meant what I said. I love you so much, and I would do anything for you.”

After a slight pause, Vinesh said, “Dear, I think I’m ready. Let’s get married. Would you be my wife?”

Her dreams were coming true. At last, Vinesh could talk about marriage with more confidence than concern.

Before she met Vinesh, Aisha’s relationships had never lasted for more than a few months.

He is the first person she has ever truly loved. The first she ever saw a future with.

Her answer was clear: “Of course I would marry you! Why else would I have stayed with you these past five years?”

And as reality hit her, her surprise turned into joy and excitement.

Two days after the phone call, on Aisha’s birthday, they met up and talked more about their marriage. They were as sure they could be.

To show his commitment, the very next day, Vinesh walked hand in hand with Aisha to the Federal Territories Islamic Religious Department (JAWI).

And at the National Mosque, Vinesh took his first steps towards becoming a Muslim. 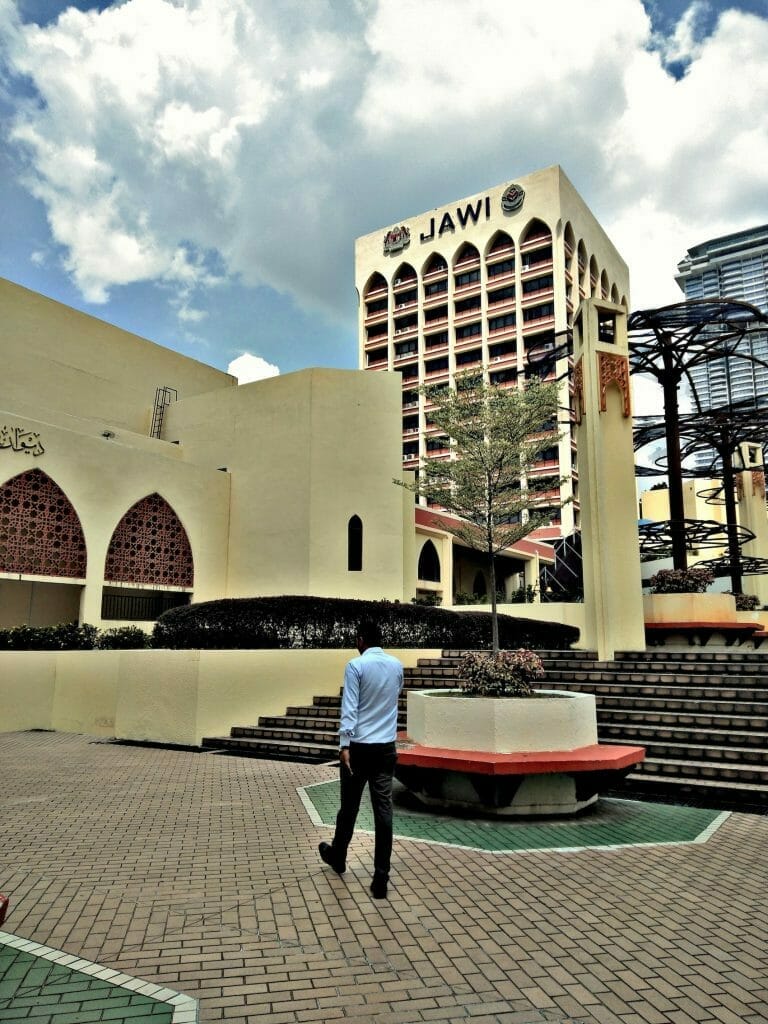 After the initiation process, and with a brand new Islam Card in his pocket and certainty about their commitment to each other, the couple was ready to start their life together.

After Vinesh converted to Islam, they were ready to register for marriage.

Before making the big step in their journey, however, Aisha wanted Vinesh to meet her father —  for the very first time since their relationship began.

Yes, throughout their five years of dating, they had managed to keep the relationship hidden from both their families.

However, with Vinesh’s conversion to Islam a success and the prospect of marriage becoming all too real, Aisha could no longer keep the good news to herself.

“Dad, I am getting married,” she said as soon as she returned home from JAWI.

“Married? To whom?” her dad asked, wondering if it was a joke as he had no idea his daughter had a boyfriend up to this point. Let alone a fiancé!

Aisha then explained, “He is Indian but he has already converted to Islam. We are in love and serious about marriage.”

Expecting him to react with anger, Aisha was surprised to find her dad smiling from the news.

“Well, there’s not much I can say then. I am happy for you, Aisha.”

Her dad’s words brought her relief.

She could see he was excited too as he proceeded to call her uncles and aunts to make the announcement.

Vinesh wanted to wait until his work visa was sorted out, while the path to meeting Aisha’s dad was set.

He did not want her dad to think he was taking advantage of Aisha for rights to stay in the country.

It was only supposed to be a one-week wait for his new work visa to be approved.

One week became one month and one month became two. The wait continued until Vinesh’s old visa met the dreaded expiration date.

He had to return to India.

While there, he applied for a Malaysian tourist visa, which bought the lovebirds 30 days to see each other. Before they knew it, he had to leave the country again.

This continued, tourist visa after tourist visa, each arrival at Kuala Lumpur setting off a ticking clock to their time together.

Until at last, Vinesh had reached the limit to the number of tourist visas he could apply for.

As his final tourist visa expired at the end of 2019, Vinesh was made to return to India without a chance to say goodbye to Aisha.

Receiving his call while he was already at the airport, Aisha was devastated.

He assured her it’d just be for a few months and he flew home, leaving Aisha with nothing but the promise he’d return. 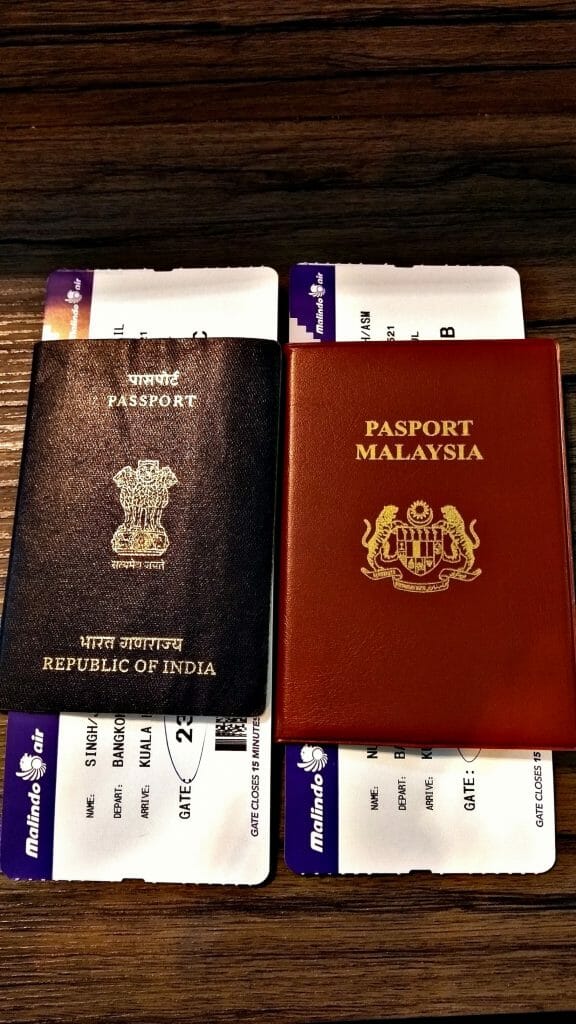 In January 2020, while Vinesh was out on a hiking trip with his friends in India, his mum found his Islam Card while cleaning the house.

When he returned home, his parents lashed out at him, raging at his betrayal to his family and his religion. There and then, he was forced to end things with Aisha.

“I can’t follow through with our plans for the future anymore. I trust you can continue to live without me,” he had sent to Aisha in front of his mum.

Of course, he had no intentions of breaking things off with Aisha. He was merely playing the role of the obedient child to appease his parents.

The text showed up on Aisha’s phone. Now, this was the first text she had received from him after nine days of him being MIA in the mountains.

While she was eagerly awaiting a “Hey, I’ve missed you” text, she instead received a sudden breakup text. Confused and in pain, she was unable to focus on work and unable to accept what had happened.

She tried contacting Vinesh on Facebook, email and WhatsApp only to find he had blocked her.

After four days in agony, she received a reply to her email. It was an apology. At last. They got on a Google Hangouts call and he explained everything.

When the time came for Vinesh to apply for a Malaysian tourist visa again, the COVID-19 pandemic had swept across the world and shut down the borders.

After everything, Aisha and Vinesh remain stuck. Apart.

Vinesh’s parents still think they are broken up, so their new routine involves secret late-night calls to each other.

They can’t text as a normal couple would because his parents had taken his phone away. So they’re back to old-school ways of calling on Skype and Google Hangouts on his tablet. 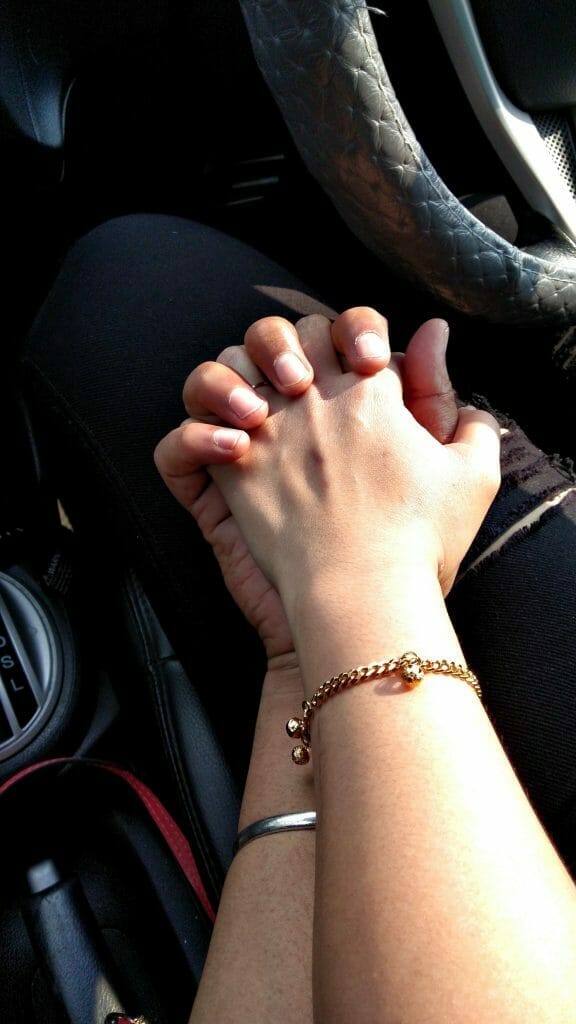 It has been a roller coaster ride for Aisha and Vinesh, but if they have survived this far, what’s another few months of lockdown?

Now, they’re waiting to be reunited once the restriction on international travel is lifted.

Once they are, they plan to go straight to register their marriage.

“There’s no more time to waste,” they tell me.

57
Dating & Relationships
When My Girlfriend Helped My Parents Reconcile After 22 Years of Divorce, I Knew She Was The One

472
Life & Everything Else
When I Was Only 5, I Was Left In The Orphanage By My Own Parents

285
Life & Everything Else
“I Don’t Remember What My Dad Looks Like Anymore.” As A Child Of Divorce, Here’s What It’s Like