For someone who’s lived in Johor Bahru practically his whole life, I’ve had a pretty typical upbringing as a Malaysian.

We Johoreans don’t all believe we’re the enlightened leaders of Malaysia, but we do have our own stereotypes to deal with.

People always say the exact same thing when they find out I’m from Johor. Here are just a few that drive me crazy:

The first thing that comes out of literally everyone’s mouth is this — and it’s tiresome as hell.

My answer is always the same: “No, I don’t. It’s too expensive.”

Have you been to their Universal Studios? It’s like Disneyland on steroids.

That’s what you get when you go for “world-class” dining — it comes with world-class prices.

What most people don’t realise is that Johor Bahru’s proximity to Singapore makes everything more expensive.

That’s because our Singaporean neighbors come over all the time to buy their groceries and fill up on cheap petrol. 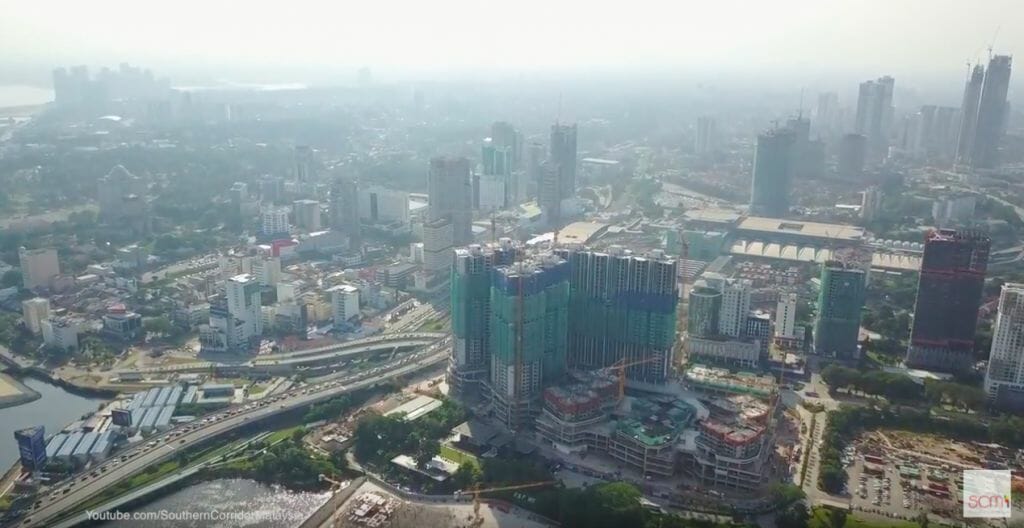 They’re like that uncle that always comes over to your house to ‘borrow’ something and never returns it back.

So local businesses price their stock higher, regardless of whether it’s property values or Penang laksa (why we don’t call it Johor laksa is a mystery).

But for those of us who are working in JB on a Malaysian paycheck, we get shortchanged, resulting in the gentrification of Johorean neighborhoods.

Gentrification is a social phenomenon where the rent prices go up, and the poor people are forced to move out.

Now, because only rich people can afford to live here, there’s a property overhang.

As such, most people have no choice but to work in the pressure cooker that is Singapore — which leads to me being asked the second most common question: 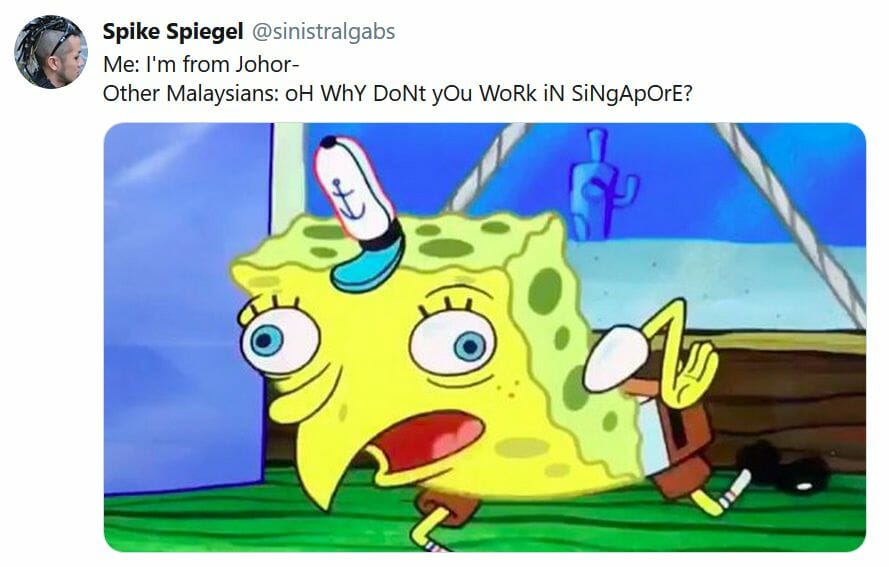 It seems pretty obvious, right? And a good chunk of us do go down that route, like these Malaysians.

For sure, working in Singapore is seen as the holy grail of jobs. Everyone wants to get a slice of the exchange rate pie (RM3 to SGD1, according to Oanda). But I was always wary of the hidden  costs.

Everyone knows the horror stories.

“I was overworked and undervalued,” said CK.

“I was passed over for promotion because I was Malaysian,” said Thiru.

“I was seen as a cheap and expendable source of labor,” said Zamri.

My dad used to travel in and out of Singapore when I was a kid. He worked as a ship navigator, and later on as a coach and maritime auditor.

I hardly ever saw him on weekdays, and on weekends he would often sleep in — on both Saturday and Sunday. Through the years, I could see the toll his job took on his health.

One night, after a particularly long day at the office, my dad had stopped by a petrol station to catch some Z’s.

When he woke up, he realised his laptop and about SGD500 in cash missing. So deep was his exhaustion, the thieves took off without even waking him up.

My dad’s experience wasn’t isolated, but a symptom of a social ill that was happening on a larger scale.

Back in the late 90s, Johor Bahru was known for its gang-related violence, snatch theft cases, and car theft.

I’ve had friends whose car windows have been smashed and laptops taken; a colleague walking to work at 6.30am was a victim of snatch theft.

Since then, the crime rate has dropped, according to this report. Take this graph from 2015 to 2017: 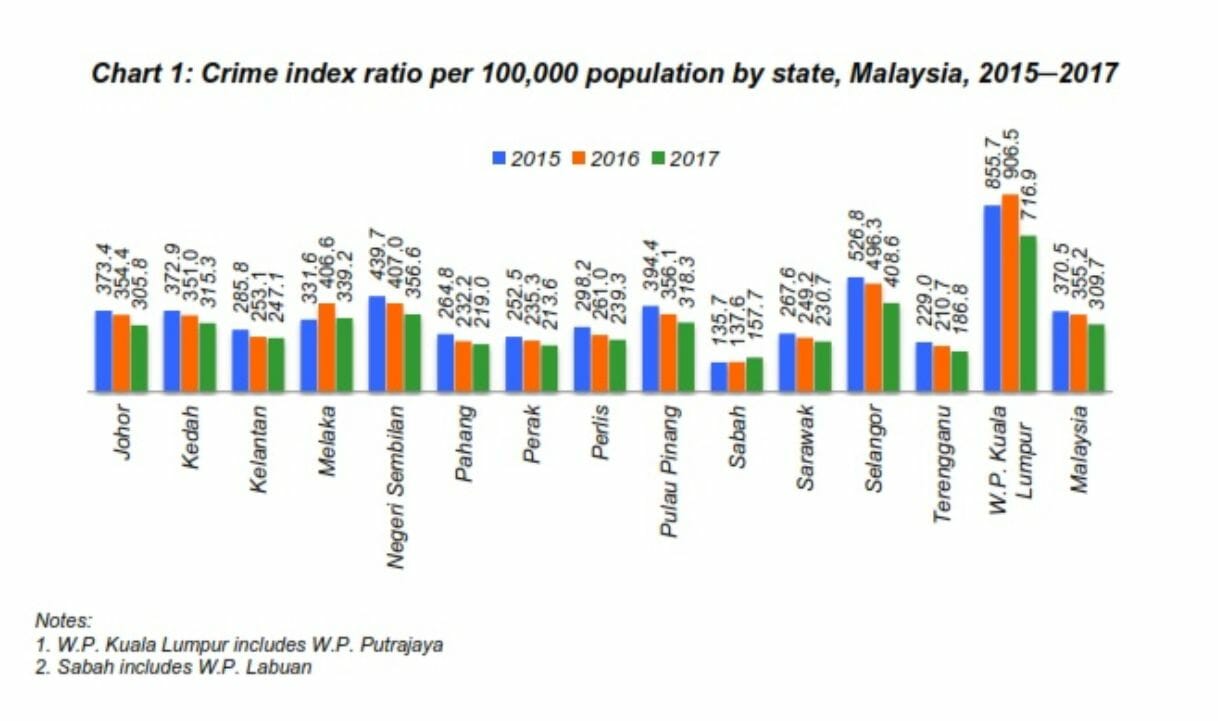 In the wake of foreign investment from China, JB has seen a boom in property development.

This has caused the overall living situation to improve, with young families sprouting up in the new developments.

In these new areas, the crime rate is lower than Petaling Jaya or Klang.

We get a lot of curiosity regarding our Royal family, especially our Sultan, Ibrahim Ismail.

He’s been in the news for a lot of things, mainly because of his open approval of Chinese investment. And he’s famous for telling a Muslim laundromat to stop being racist. 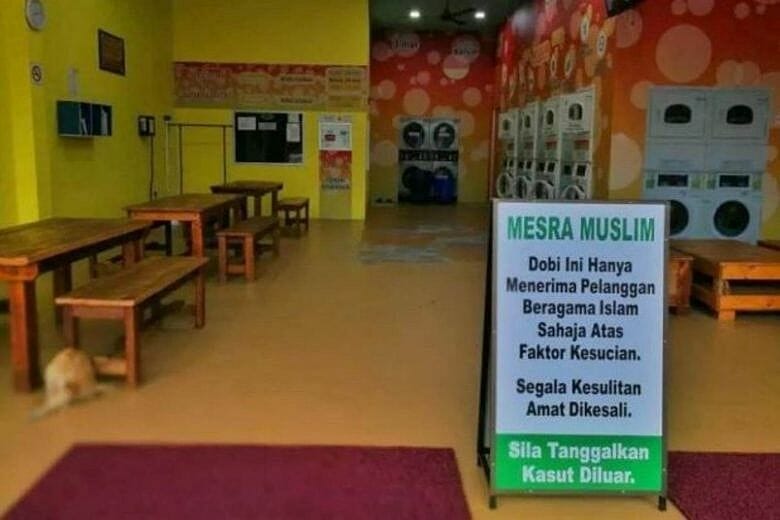 Pictures of the self-service launderette with its “Muslim Friendly” sign at the entrance had gone viral. The sign had big lettering saying that it only accepts clothes from Muslim customers for “reasons of cleanliness”.

The Sultan fired back: “I cannot accept this nonsense. This is Johor, which belongs to Bangsa Johor, and it belongs to all races and faiths. This is a progressive, modern and moderate state.

More recently, he was on Twitter to point out the hypocrisy of those who ask Muslims to avoid using “Merry Christmas” as a greeting to non-Muslims. 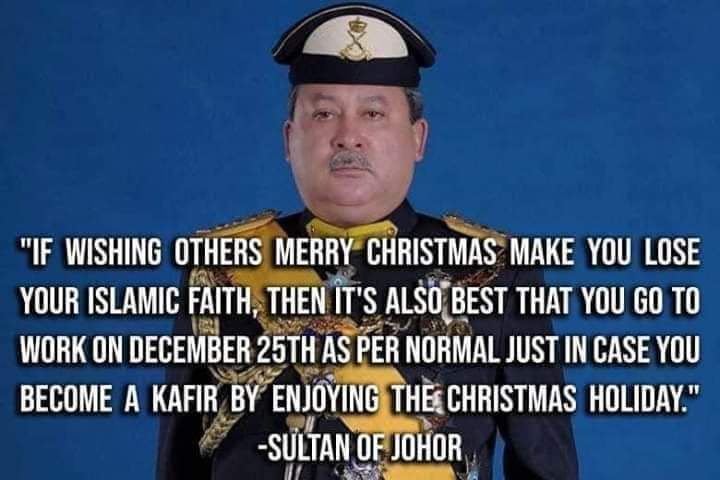 In short, he’s a man who’s not afraid to stand up for equality. I for one am glad he’s my Sultan.

So what was living in Johor in the 90s really like? 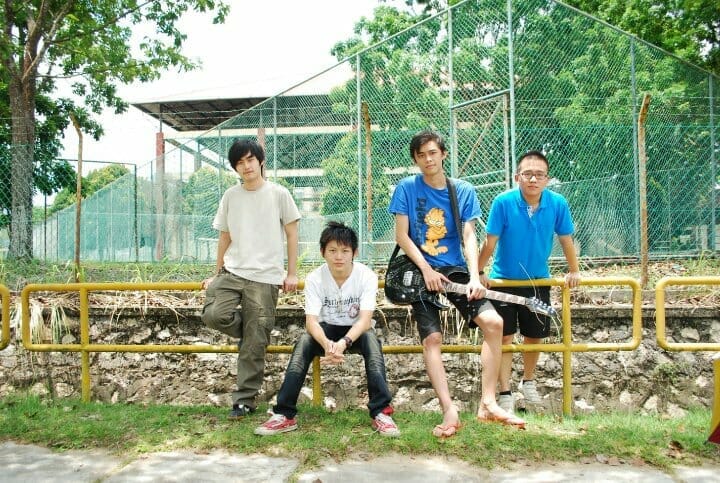 [Source: The writer in college]

I lived in Johor Bahru, the capital of Johor. I can’t speak for those from Kulai, Desaru, or Batu Pahat, so I apologise if you feel left out by this article.

For me, JB has always felt like it was simultaneously too large and too small for a kid growing up with a dial-up internet connection and a lack of cultural roots.

“It was a city of suburbs and large-scale town planning,” Zi Xuan, a school friend, reminisced.

Memories of JB were of long pothole-filled roads, the smog rising through the air, the cloudy skies filled with a rusty-yellowish tinge as the sun hid behind them, the overbearing heat as we took the bus to the cluster schools in the heart of the city.

“There was never really a cultural hub, not like KL where you can see the Menara KL from miles away,” said Farid, who owns a cybercafe in Skudai. 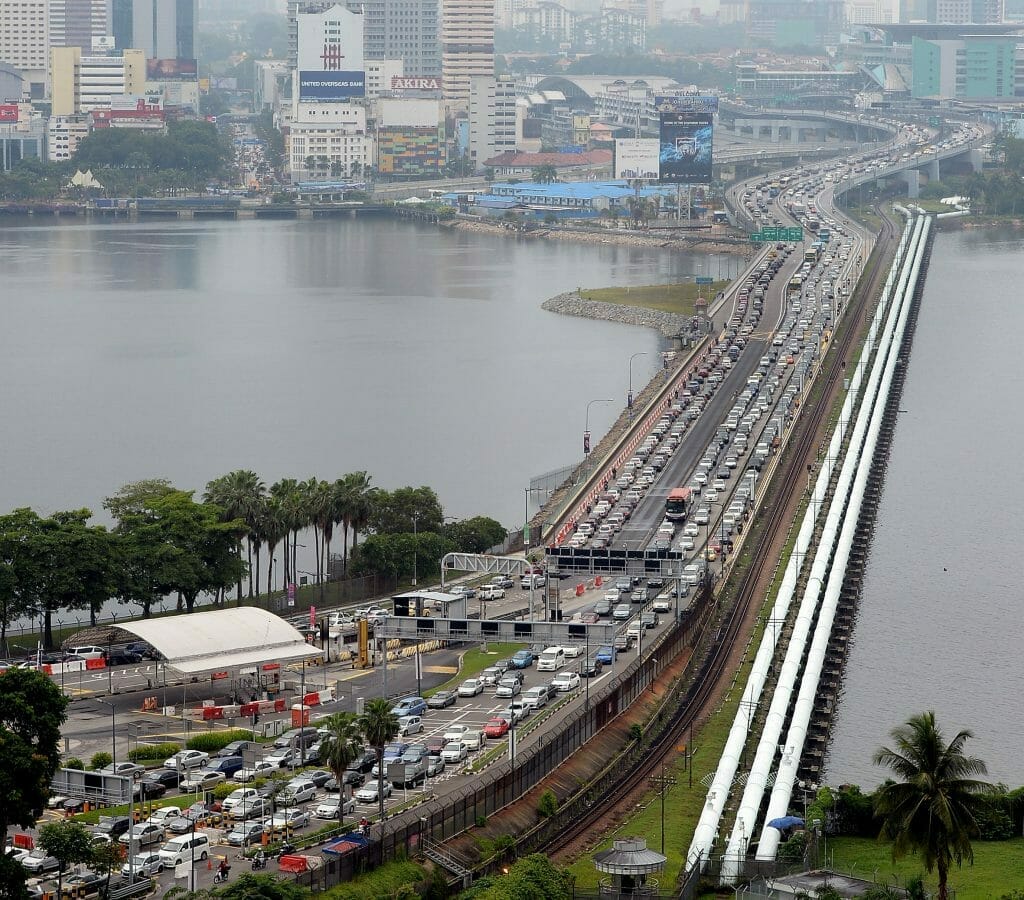 Traffic congestion on both directions of the Causeway.

“The hub of JB was always the 5-lane causeway leading to Singapore. Everything else just sprouted up around it: malls, hotels, duty-free zones, schools and hospitals.”

I remember sprawling schools filled with loud students, endless tuition classes on weekends, and treating ourselves to Mcdonald’s ice cream at City Square.

Growing up in JB has always made me yearn for something bigger and better.

And I’m not the only one who feels like this.

“I’ve always felt that Johorians collectively have the urge to prove ourselves as capable as our KLite or Singaporean counterparts,” said Yi Ying, who’s currently working as a remisier.

It’s true that Johoreans tend to be sidelined in favor of KLites or Singaporeans, who enjoy the perception that they’re more worldly and enlightened.

But based on my knowledge of my peers who have since travelled the world and become accomplished Johoreans in their own right, I think we’ve earned our place.

Do you know anyone who says these things? Tell us in the comments!

For more articles like this, read: How are Malaysians Really Doing in Singapore? And Who’s Really The King Of Street Food – Malaysia or Singapore? 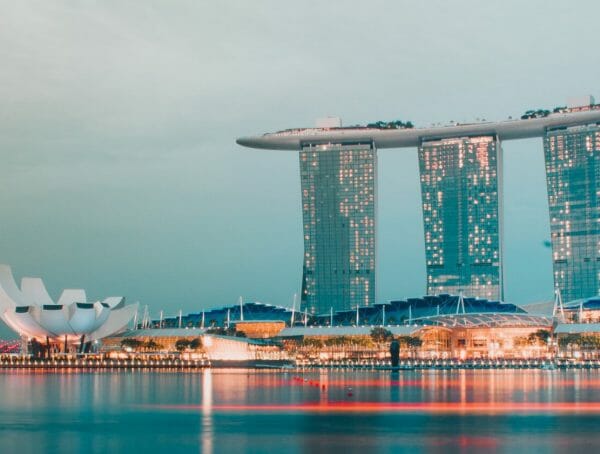 Real Relationships
I Gave up My Life in Malaysia When My Husband Moved To Singapore, and Here’s Why It Sucks 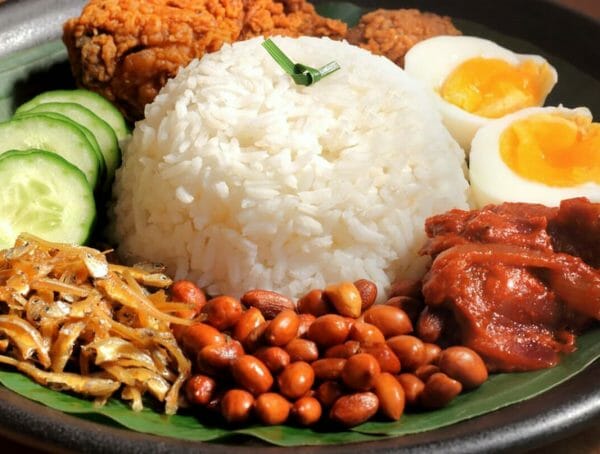