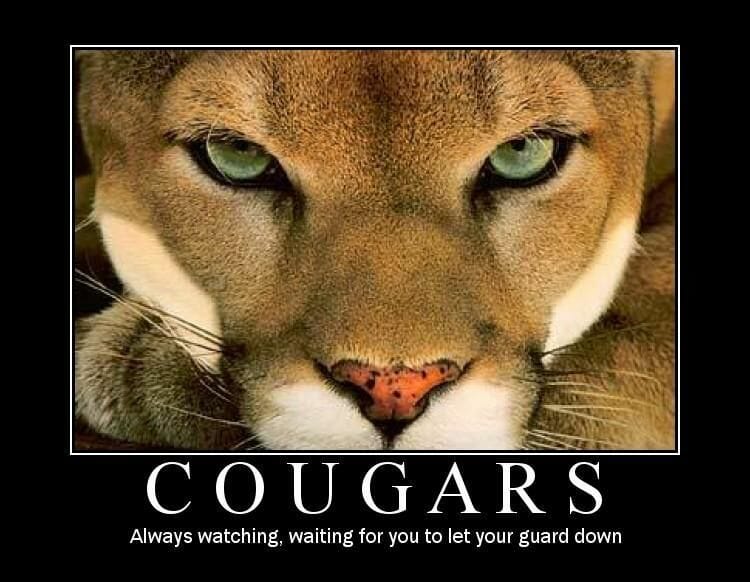 I used to be called a ‘Cougar’. I don’t mean the feline variety, but the one where I’m a mature (read: older) woman who date younger men.

I’m happily married now, but back when I was dating my fair share of younger men, I’ve realised a few things. Here’s my advice for anyone who’d like to participate in ‘the hunt’.

WHAT YOU SHOULD DO

My first ‘cub’ was the same age as my baby brother’s. I was a bit anxious at first, as we had a wide  age gap. So, the night before the date, I actually had a chat with my brother, just to get some ideas on what to talk about.

The ‘cub’ mentioned hiking, and though I wasn’t keen on it, I followed him anyway. Our first hike was up Nuang Mountain that weekend. If you’ve never been to Nuang, let me tell you, it’s not an easy hike. It was a total disaster (for me), and I landed on my butt a few times.

I thought that would turn him off, but surprisingly, he found that adorable. Apparently it gave him a chance to be my knight in shining armour every time I fell.

The next weekend we did something I liked for a change – we went for a yoga class. He found it too slow for his liking, but confessed that he enjoyed gawking at how flexible and ‘bendy’ my body was.

We had fun doing different things, and surprisingly, I eventually liked hiking and running on trails. Although we didn’t work out in the end, we remained friends. Sometimes I would join his hiking group, and other times, he joins my yoga class.

(Just to score some numbers with the ladies, of course.)

Boys will be boys after all. Younger guys tend to not be that mature yet, so just soak in the fun and enjoy the experience while it lasts. Having something in common helps, but don’t let opposing personalities stop you from dating a younger guy (and vice versa).

I was dating this guy, David, who was 5 years younger than I was. While on a date, we bumped into a friend of his who said, “You never told me you had an older sister!”

David didn’t correct him, nor did he introduce me. Suffice to say, the date went sour after that.

Since then, I was paranoid of what others thought of me whenever they saw us together. It eventually got to a point where I couldn’t take it anymore. We eventually broke up.

All I’m saying is, be prepared for harsh comments. People may think you’re the older sister (or worse, the mother!). It’s normal – don’t get easily offended or insulted. Instead, be the confident woman who laughs it off. I guarantee you, he’ll adore you more for that.

WHAT YOU SHOULDN’T DO

Don’t be a sugar mommy

I’ve always made it a point to go Dutch whenever I’m on a date. However, there was one young blood who kept making excuses whenever the bill arrived.

When we were going out, he never paid. The first few times, he claimed that he forgot his wallet. Then he said he didn’t have any cash on him. At this point, I was already paying for our weekly movie dates (which, coincidentally, were the movies HE wanted to watch).

I knew he wasn’t earning as much as I was, but come on – not even having the money to pay for gas for his motorcycle? A full tank only costs RM5 – RM7!

Unsurprisingly, we didn’t last long. I just got sick of paying for everything, and finally told him off for it.

Now, don’t get me wrong – I don’t mind picking up the bill once in a while. But a relationship should be equal – both parties should take turns when it comes to financial matters. When things get serious, that equality would apply to everything else too.

Don’t try to change someone (You can’t anyway)

Roy was a younger guy who was still searching his identity and style. Back then he would call me a nag for fussing over his dressing. But really – how could I not say anything when he turned up for our dinner date at a posh restaurant in the city, looking like some 90s hip-hop artist!

Yeah, complete with all those fake gold chain necklaces, baggy T-shirt, (very) low-rise jeans hung loosely to his butt, and boots that were so big he looked like he was auditioning to be the next Ronald McDonald. All that while I was in my new black dress, looking all demure.

I cancelled the date.

I mean sure, I was older than him, and everyone is free to dress as they like – but things got too much when he talked about getting dreadlocks, after we went to see a reggae band one night. A week later, he made an appointment to see the hairdresser.

I called it quits.

Everyone went through a phase in growing up, so I guess I shouldn’t be that fussy over his (poor) choices. I was the girlfriend after all, and condemning his style probably did more harm than good. But if you’re going to date a younger guy, know that they’re still discovering themselves, and it might take a while before he ‘grows up’.

Until then, just grit your teeth, smile through the ‘pain’, and don’t get too bothered over what he does (or doesn’t do). It’s just a trend – it’ll pass.

Rahman was a young stud and my trophy boyfriend. His charming ways often got us into clubs and restaurants easily. At first, I didn’t mind the attention, and even felt proud with this hot guy in my arms.

But soon, jealousy reared its ugly head. I felt threatened and insecure whenever younger women got all flirty and seductive with him – while ignoring me who would usually be right next to him.

It didn’t help that he enjoyed the attention either. Whenever these girls flirted with him he’d act as if I wasn’t there. Long story short, we didn’t stay together long.

Looking back, I should’ve been more confident. I wasn’t like those younger girls who were drooling over him. I should’ve charmed him over instead of being angry.

6 months into the relationship, I made the mistake of asking this younger guy ‘where do you see us in 5 years’ time?’

I thought we were getting serious, but the feeling wasn’t mutual. He went quiet for a few days, and then simply didn’t answer my calls. Eventually, he blocked my number.

Word of caution – just enjoy the ride and never pressure these younger men (or any men for that matter) into a lifelong commitment. You’ll only scare him away if he’s not ready yet.

You may get your fairy tale ending being in a relationship with a younger man, or you may not. The point is, don’t think too much about ‘OMG my clock is ticking’, and just go with the flow.

I learned my lessons dating younger men over the years. I decided it wasn’t for me when I met my now-husband who is my own age, who ‘gets’ me in every way.

In other words, I’m much more compatible and comfortable with him than with these younger guys.

But then again, this cougar-cub relationship might just work out for you. Who knows?

If you do decide to date them, I hope you learned a thing or two from my experience!

Have you dated a younger guy before? What was it like? Tell us in the comments! 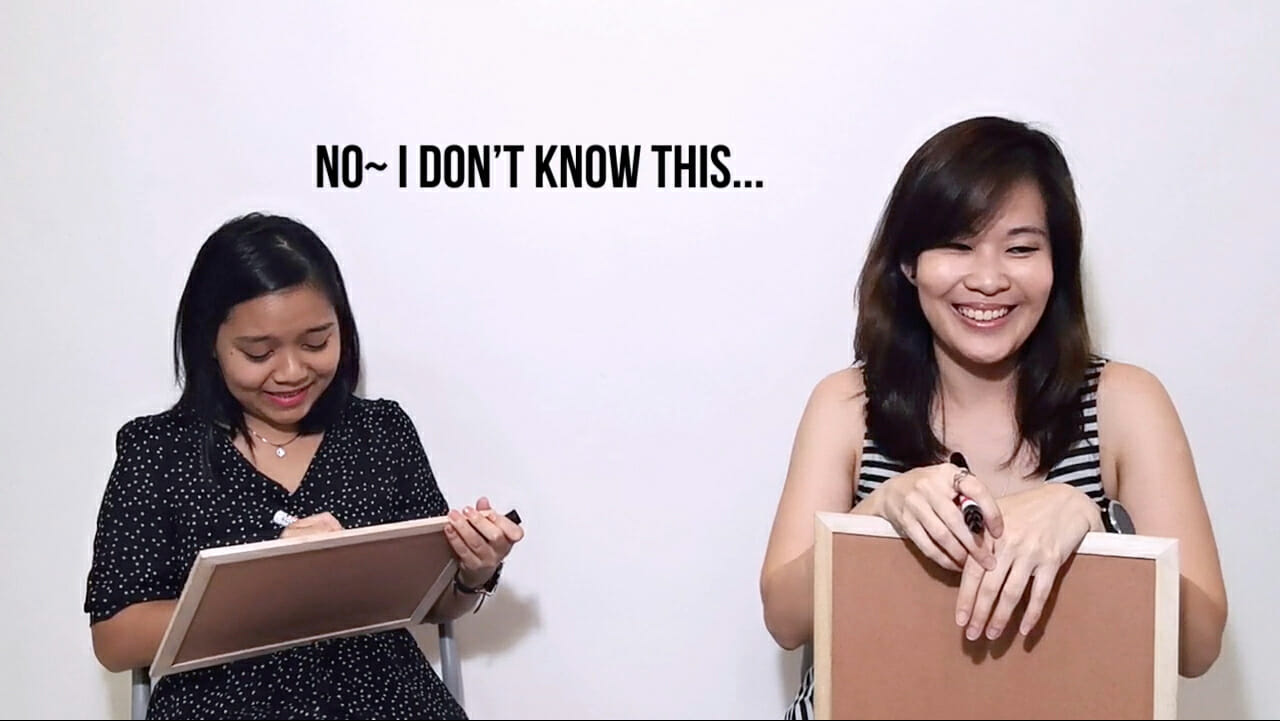 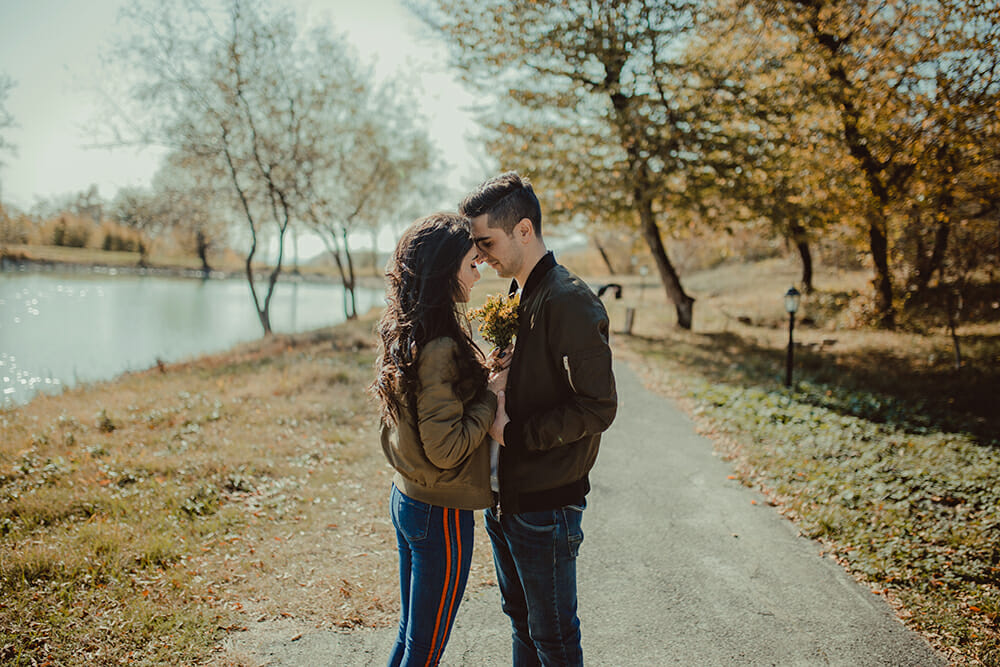 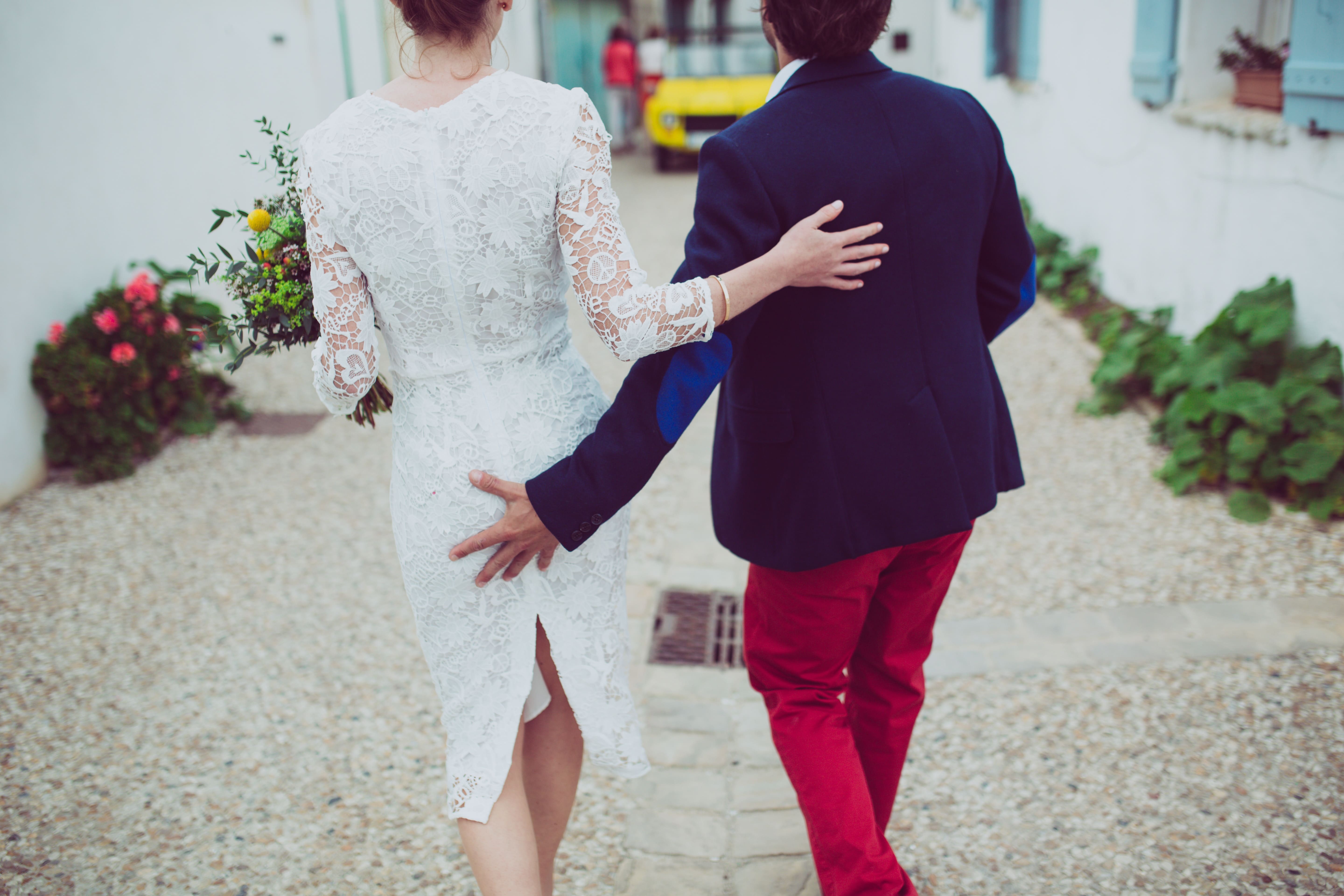 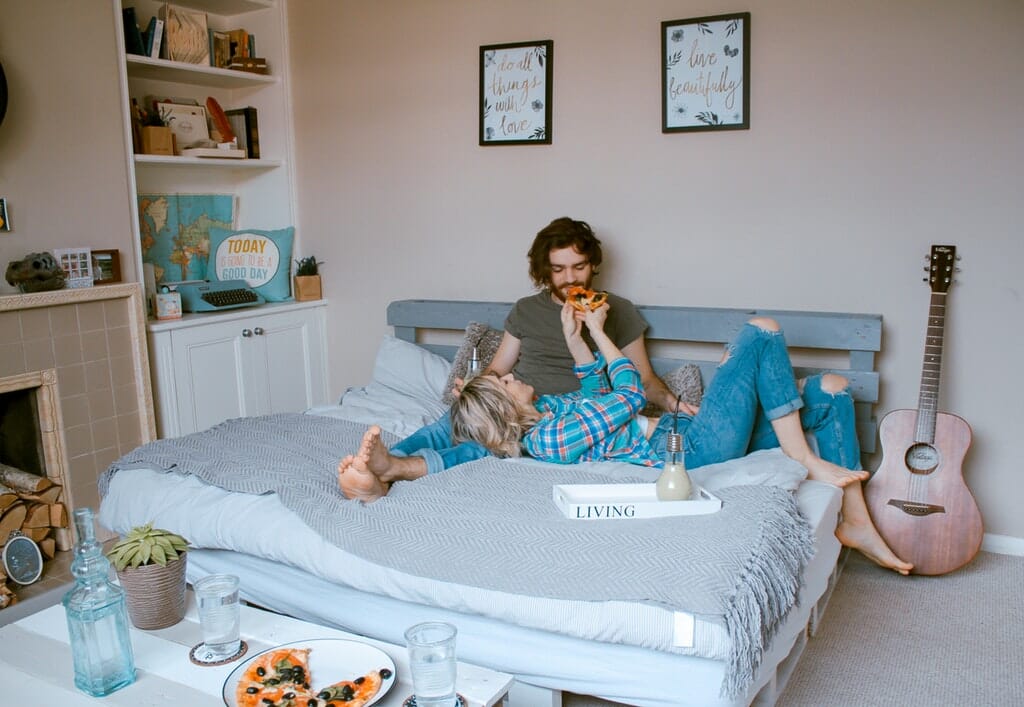 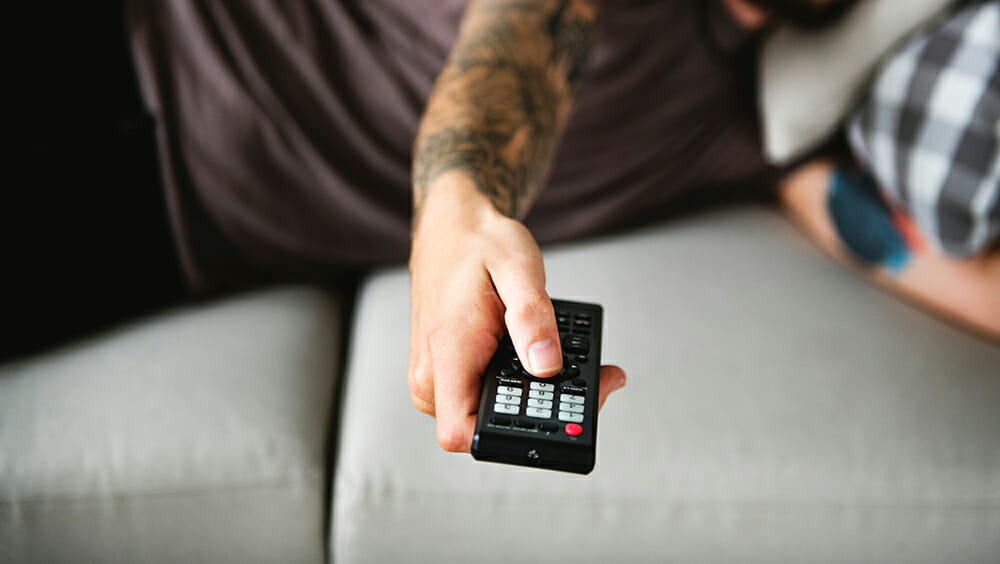