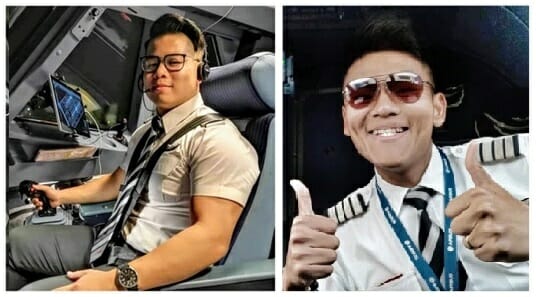 When countries all over the world closed their borders, it hung airlines out to dry.

With most planes grounded, airlines are burning millions by the day, largely due to plane leases. What most people don’t realize is that airlines usually don’t own most of their planes and those plane leases don’t pay themselves.

In a desperate fight for survival, they jettisoned pilot jobs, gave pay cuts and unpaid leaves to cut costs.

For many pilots who have only ever known the cockpit, this turn of bad weather has been challenging. Fortunately, pilots are trained to think on their feet.

Thrust unwillingly into this new reality, these 5 pilots open up about the impact Covid-19 has on their rice bowl:

Yishern is a pilot with experience on both turboprop and jet aircraft. He has been flying for 5 years.

Flying was a means to put food on the table for his family and single mother. In 2019, he also founded Yours Truly Entertainment, an events consultancy company that focused on weddings and corporate events.

After he was made redundant, Yishern felt depressed and overwhelmed. He had bills to pay and a wife who was 6 months pregnant.

“Dark thoughts ran through my mind. What if I can’t afford the baby and hospital fees? How am I supposed to pay my mortgage when the moratorium is over?”

Rather than throwing in the towel, he instead threw himself into Yours Truly Entertainment. By that time, mass gatherings were frowned upon for their role in virus-transmission, so he had to adapt.

Yishern remembered the hassle he had to go through when proposing to his wife. Besides, he has a lot of ideas for proposals. As a result, he decided to pivot and specialize in marriage proposals.

“Planning someone’s proposal is exciting but tedious. For the moment to be as perfect as possible, everything boils down to timing,” he enthused.

Yishern’s services included decorations, choreography, planning, ideas, and of course, the execution on the day itself.

“I’m a person who loves sappy romantic comedies, so I have a lot of ideas on how a proposal should be,” Yishern said.

Yishern says he looks forward to returning to the cockpit he loves when the industry eventually recovers. But for now, planning proposals has become his passion. In fact, it’s often not about the money anymore.

“I find fulfillment in being part of a couple’s big moment. I love the role I play in their happiness. Each and every experience is very rewarding.” 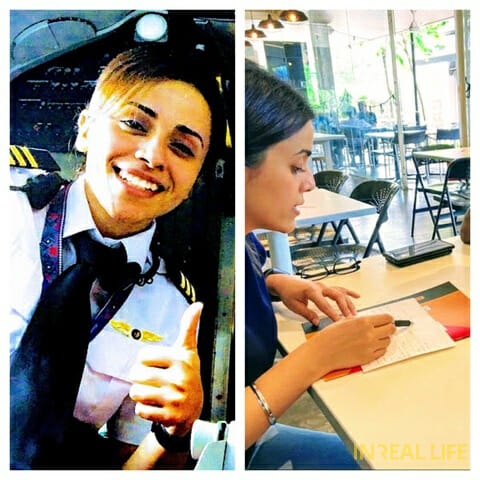 Since she was a little girl, all Hazel wanted to do was fly. And fly she has — for 7 and a half years.

But when Covid-19 swept through our world, she took a big pay cut and had to dig into her reserves to make ends meet.

“It was worrying,” she said. “I was in deficit every month. I had to cancel my gym membership, downgrade my internet and mobile data plans, and canceled a credit card. I snapped into survival mode.”

To make matters worse, her family is not here with her in Malaysia, although they do offer her moral support from afar.

She realized that this major downturn could last for a while, so she looked to her side gig as a Unit Trust Consultant.

This pandemic has forced many people to mature financially. When she first ventured into consultancy, it was small-scale, handling her own and her family’s finances.

Now she helps her friends and colleagues plan their finances.

And although Hazel is eager to go back to flying like she used to, she is confident that tough times don’t last.

Hazel’s advice for the rest of the year: “Spend your money wisely by planning your day-to-day expenses. Every cent matters.” 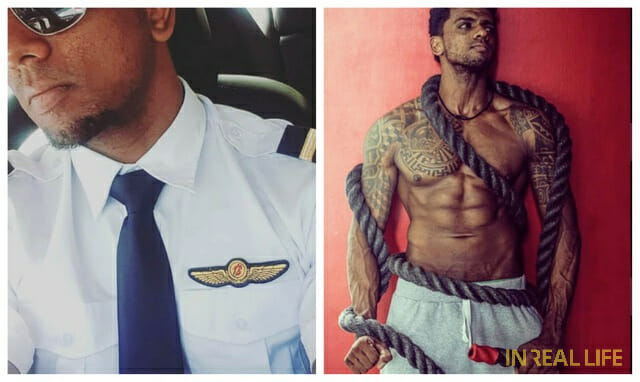 Varma loves everything about being a pilot, from the uniform to the job scope and the sensation of being airborne.

“More than anything, it was my dream to pick up flying, but my parents insisted that I earn a solid degree first.”

So he dabbled in different university courses before finally getting the green light to pursue his dream of flying.

When he graduated from flying school with a Commercial Pilot License, it was the happiest day of his life.

However, the airline job market in the early 2010s was unfavorable, and many fresh grads had trouble finding a job. For one year he tried to get a flying job, without success.

“I nearly gave up on my dream…. But since I enjoy gymming, I thought — why not get certified as a fitness trainer?”

So Varma started off at a commercial gym, where he learned the workings of the fitness world.

By 2013, he earned the title of ‘Top Trainer’ and was eventually promoted to fitness manager. After 3 years, he became a freelance trainer and then started V Fitness, a warehouse gym located in Puchong.

Varma loved the fitness business, and could work 17-hour days without complaint. But he did not forget his other love: Flying. So when the opportunity to join an airline presented itself in 2019, he jumped at it.

Unfortunately, in 2020, flights were grounded as all international borders closed, and Varma was put on no pay leave.

Finding himself back at square one, he was devastated that his new-found fortune in the aviation industry turned sour so quickly.

But with experience came acceptance: “Instead of moping over this dip in luck, I am grateful that I can focus on what I already have.”

So he poured his heart back into his gym. With everyone staying at home, he expanded into food delivery with V Fit Kitchen, a healthy meal prep service.

Varma thinks that the aviation industry will take some time to recover, but he is not disheartened.

“I’ve always wanted to create a name for V-fitness so I’ve used this time to strengthen my fitness brand.”

Once upon a time, Amirul was a helicopter pilot based in Miri where his duties included aerial photography and cargo transportation. Like most pilots, flying was Amirul’s childhood dream.

He later decided to transition into fixed-wing operation. But just as he was making the switch, Amirul was placed on furlough.

“It was really stressful,” he confided. “I think most pilots are stressed out now, and I am no exception.”

But having always been a resourceful person, he instinctively clicked into survival mode.

Aware that the pandemic had rendered countless people jobless, Amirul foresaw steep competition in his job search. As such, he decided to grab whatever opportunity presented itself, no matter how different from his role.

“When my friend suggested becoming a Real Estate Negotiator, I didn’t think twice — I jumped at the opportunity and got certified.”

Having no experience in the field, it was a steep learning curve. He forced himself to learn and thrive.

Of course, Amirul can’t wait to get back to flying. Nonetheless, he’s come to recognize his property gig as a viable source of income and plans to pursue it —  even after returning to the cockpit.

“There are opportunities everywhere,” he commented. “Just learn to adapt. Be willing to accept any opportunity and don’t be fussy. That is how we survive.” 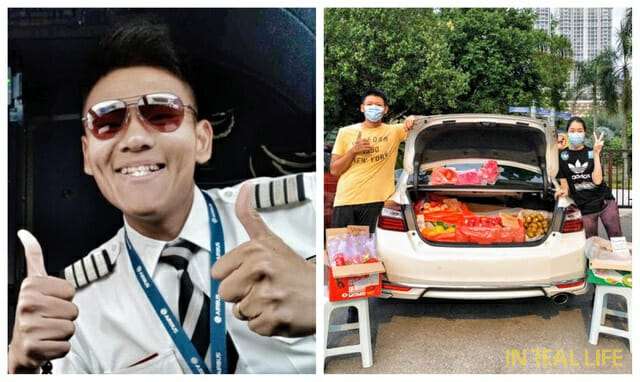 Captain Tommy has 13 years of experience in the aviation industry. But from the moment he stepped into the flying school—the ground subjects; the flight training—it was love at first flight.

But then, Covid-19 took a giant chunk out of his rice bowl.

“When I received my retrenchment notice, it was very sudden. At first, I couldn’t digest the news.”

“2 or 3 days later, I fixated on the sweet memories I’ve accumulated over my many years of flying, and I wondered, was that the end of my flying career?

“However, my wife helped me out of my rut. Although airlines around the world are mostly on a hiring freeze, I sent my resumes out within a week.”

“I told myself that as long as I’m breathing, I will wake up every morning with gratitude for my health and the opportunity to pursue the things I desire.”

Next, along with his supportive wife, they started Fruto, selling imported fresh premium fruits from all over the globe.

To prepare himself, Captain Tommy worked in a wholesale fruit company for 2 to 3 weeks. There, he learned about fruits, equipment, dealing with suppliers; he equipped himself to run a fruit business.

Captain Tommy admits that he misses flying. Despite that, he busies himself making deliveries all over the Klang Valley. He has poured his heart and soul into this business.

When the author of this article received her delivery, it came with a personalized card, nestled in a box of mangoes. Sweet, fresh, and full of love.

For more stories like this, read: 5 Facts You Didn’t Know About Being a Helicopter Pilot and My Husband Was A Major With The Malaysian Airforce. Here’s How He Was Trained.

Post Views: 271
Closed BordersJoblessMalaysia AirlinesPilotRMCOSide Income
Previous ArticleHow Moving From the Suburbs of JB to KL Changed Me as a PersonNext ArticleCorporate Team Building Is a Crock of Crap, and Here’s Why
Read More Stories
[wprpi by="category" post="5" excerpt_length="0" thumb_excerpt="true"]